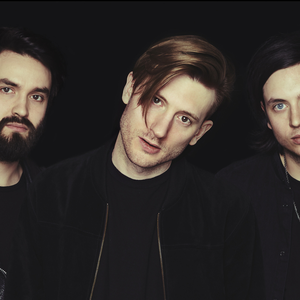 Dinosaur Pile-Up are an English alternative rock band who formed in late 2007. Hailing from Leeds, West Yorkshire. Current members are lead singer and guitarist Matt Bigland, drummer Mike Sheils and bassist Johnny Seymour. They are also often compared with the Seattle grunge scene of the early 90s. Dinosaur Pile-Up formed after Matt Bigland's old band Mother Vulpine split up back in 2007. Matt had been creating songs used for Dinosaur Pile-Up whilst he was in Mother Vulpine. Matt recorded a demo tape consisting of the songs "My Rock 'n' Roll", "Love Is a Boat and We're Sinking", "Melanin", "Let's Get Up", "What Howard Said" and "I Get My Direction" whilst he was still in Mother Vulpine. A short time later, after Mother Vulpine broke up, Matt recruited Tom Dunford on bass and Steve Wilson on drums to complete the line up. Matt Bigland has said he thought of the name 'Dinosaur Pile-Up' after watching the 2005 film King Kong. Matt Bigland has said in an interview; "I watched the remake of King Kong. Which was pretty bad! It was ages ago, before this band, or even the idea of this band ever existed. Anyway, there was this part in it where this stampede of dinosaurs, the front one is shot in the leg or something, and it trips up, and then all these huge dinosaurs trip up, roll down this hill, and it just ends up in this massive pile up, and everything in between them survives. I thought it was ridiculous, and as a joke I said, I have to start a band called Dinosaur Pile-Up. Dinosaur Pile-Up then released My Rock 'n' Roll EP in late 2008 and the Traynor 7" and The Most Powerful EP in the Universe in 2009. Also in 2009, they played on the BBC introducing stage at Leeds Festival and were invited on tour with alternative rock group Pixies on their European tour. Then in 2010, Tom Dunford and Steve Wilson left the band. Steve Wilson joined the band Japanese Voyeurs (whom Dinosaur Pile-Up would later tour with on the Rock Sound Exposure Tour alongside The Xcerts), and Tom Dornford-May joined the punk rock band Fake Death. This meant that Matt would have to bring in new members Harry Johns (formerly of Old Romantic Killer Band) on bass and backing vocals and Mike Sheils on drums. Matt Bigland then went into the studio to record Dinosaur Pile-Up's debut album Growing Pains. The recording of Growing Pains took place between late 2009 and early 2010 in the space of about two and a half months. Growing Pains was recorded solely by Matt Bigland playing all the parts on the album in a home studio in Bridlington. After the release of Growing Pains in October 2010, Dinosaur Pile-Up began a full UK tour, also playing in the rock exposure tour and various dates across Mexico, as well as supporting slots with bands such as Feeder, Cage the Elephant, Turbowolf and Twin Atlantic. By August 2011, the band had finished their tour and are set to record their follow up album due to be released at the beginning of 2012. On December 1, they uploaded to their SoundCloud and Facebook accounts demos of two tracks, "In My Room" and "Thread", which are said to be featured on the up-coming album. In November 2011, Matt Bigland posted on the Dinosaur Pile-Up website that Harry Johns had left the band to concentrate on his solo project and that two people known as Alessio and Scott were filling in on bass and second guitar. Also, On March 8, 2012, Japanese Voyeurs had announced their breakup and said on their Facebook that their bassist Johnny Seymour had joined Dinosaur Pile-Up. Matt Bigland has also said he's currently in the studio recording the second album and will be recording every instrument on the record as he did on Growing Pains. Read more on Last.fm. User-contributed text is available under the Creative Commons By-SA License; additional terms may apply.