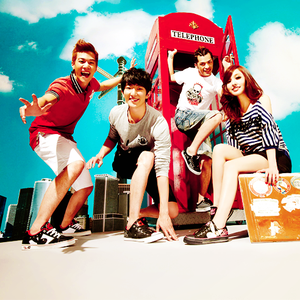 Da Mouth (Chinese: 大嘴巴; pinyin: dà zui ba) is a newcomer to the Mandarin music scene. A Taiwanese hip-hop band made up of MC 40, DJ Chung Hua, male vocalist Harry, and female vocalist Aisa, they are considered the Asian Black Eyed Peas due to the groups diversity. They released their self-titled debut album "Da Mouth" on November 16, 2007. The band's Chinese band name directly translates into "big mouth". Their English band name is derived from the concatenation of the Chinese character for "big", 大, which when romanized using pinyin becomes "dà", and the translation of the second half of their Chinese band name. Read more on Last.fm. User-contributed text is available under the Creative Commons By-SA License; additional terms may apply.