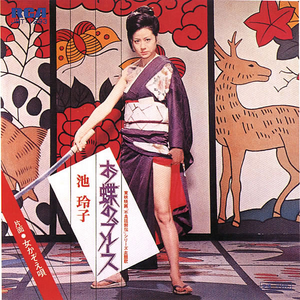 Reiko Ike (池玲子)(b. May 25, 1953) is a Japanese actress whose involvement in the 1970s film industry elevated her to the status of a national sex icon. Her films belong predominantly to the Pinky Violence/Yakuza Girl genre, where - along with her much-publicised rival Miki Sugimoto - she helped define the role of the Sukeban, or ‘girl boss’ (a role reprised by Tarantino for the character of O-ren Ishii in Kill Bill). She worked on the twelve films and one album that comprise her ouevre in a single decade - appearing in her first film, ‘Sukeban Gerira’ (‘Girl Boss Guerilla’) in 1972 and disappearing from the public eye in 1979. Her album, ‘Reiko Ike Sings’, is an extremely rare slice of library lounge and porno mumbling featuring (amongst other things) a bizarre and engaging adaptation of Terry Riley’s ‘A Whisper In Curved Air’, and is highly prized by collectors not only for the exotic sounds within but for the elegant, raunchy cover art. Her troubles with the law (she was arrested once for drug use and once for illegal gambling) bring her allure as a cult figure into yet sharper focus. Read more on Last.fm. User-contributed text is available under the Creative Commons By-SA License; additional terms may apply.