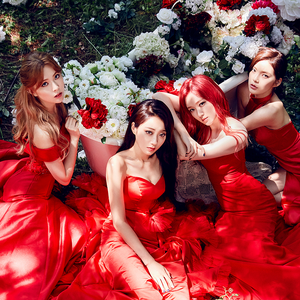 나인뮤지스 (Nine Muses) is a 5 member South Korean girl group managed by Star Empire Entertainment. Nine Muses’ official members are Sungah (성아), Kyungri (경리), Hyemi (혜미), Sojin (소진), and Keumjo (금조). The group debuted in 2010 with "No Playboy". Shortly after their debut, Jaekyung, Bini, Rana and Erine were announced to be leaving, although Erine decided to return to the group. They also promoted their debut single album side track, "Ladies". The group had a much better received comeback in 2011 with "Figaro", although it was revealed that their company had nearly decided to rename them "Sweet Candy", due to fears that people would become confused as to why a group called "Nine Muses" only had seven members. In 2012, Kyungri was added to the group lineup in time for their 2012 release, "News". In 2013, Sungah was added to the group line up, so Nine Muses could finally living up to their name and promote with 9 members. 2013 was a busy year for Nine Muses; 4 comebacks and their first full album being released. They promoted (in order) Dolls, Wild, Gun and Glue; Gun being the title track of their full album "Prima Donna". In 2014, members LeeSem, Eunji and Sera all announced their departure from the group, and the company announced there would be a comeback in August of that year with a new member. In 2015, two new members, Keumjo and Sojin, joined the group. In 2016, members Erine and Minha left the group following the expiration of their contracts. Later in the year, Hyuna also left the group due to contract expiration. They came back as a subunit 나인뮤지스A which consisted of Kyungri, Hyemi, Sojin and Keumjo with a single album Muses Diary. In 2017 it was announced that the group will be coming back with the same line-up as Nine Muses rather that Nine Muses A with Sungah being on hiatus to study music. They released mini-album Muses Diary pt. 2: Identity in June. Current Members: Son Sungah (성아) Park Kyungri (경리) Pyo Hyemi (혜미) Lee Keumjo (금조) Cho Sojin (소진) Former Members: Kim Rana (라나) Lee Hyebin (Bini) Jung Seoyoung (Jaekyung) (재경) Lee Hyunju (Lee Saem) (이샘) Park Eunji (은지) Ryu Sera (세라) Lee Hyemin (Euaerin) (이유애린) Park Minha (민하) Moon Hyuna (현아) Read more on Last.fm. User-contributed text is available under the Creative Commons By-SA License; additional terms may apply.