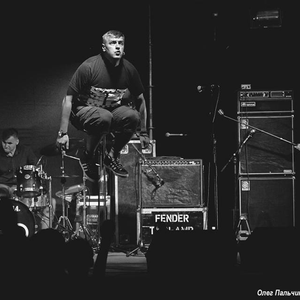 Ukainian music band which was formed in 2013 by ex-frontman of band «И друг мой грузовик» (And my friend truck) Anton Slepakov and guitarist Valentin Panyuta form band «Lюк» (Hatch). Anton Slepakov and Valentin Panyuta decided to form a group after a meetup in one of the Kharkov's cafes. Panyuta's music turned out to be the missing part from already existing Slepakov's project «НеГрузовики» (NotTrucks). After recording a debut three-song single «Сгруппироваться» (Flock) on April 1, 2013 and a mini album «Без трамваев» (Without trams) on April 16, 2013 which were recorded on money raised by croudfunding, they found a drummer, Stas Ivashchenko from band "DOK" The music itself if a mix of garage rock, IDM, and diferent types of electronic music with recitative lyrics. Read more on Last.fm. User-contributed text is available under the Creative Commons By-SA License; additional terms may apply.