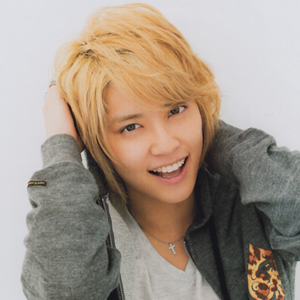 Tegoshi Yuya (手越祐也) is a member of the Japanese boyband NEWS under Johnny & Co management. He was born on 11 November 1987 in Kanagawa, Japan. Currently he is enrolled at Waseda University. Tegoshi is famous for being the currently youngest member of NEWS, and had only been in Johnny & Co for 10 months before being put in the group NEWS (as compared to, for example, Yamashita Tomohisa, who was in the company for 7 years). He is also widely known as the most skilled singer by NEWS, even according to the other members. Affectionate nicknames from members and fans include Tesshi and Tegonyan (coined by Nishikido Ryo). Dramas in which Tegoshi Yuya has appeared as a regular include My Boss My Hero (with fellow Johnny's members Tanaka Koki and Nagase Tomoya), 15 Sai no Blues, and Gachi Baka. He also starred in the critically acclaimed movie Shissou from famous Japanese indies filmmaker SABU. In 2007, the Japanese dub of Disney movie Happy Feet was released in theaters and Tegoshi voiced the lead role of Mumble. The opening song for the Japanese Happy Feet is the newest single by NEWS, in which Tegoshi is a member. During the 2006 NEWS hiatus, Tegoshi was part of the group Tegomass (テゴマス and released a single with member Masuda Takahisa under that unit. The purpose of the group was to promote Johnny's outside of Japan. In 2007, along with NEWS group activities, Tegomass will continue as a unit to support the Japanese national high school spring volleyball tournament as well as sing the intro/outro themes of the anime Lovely Complex. Both themes will be included in their newest single. Read more on Last.fm. User-contributed text is available under the Creative Commons By-SA License; additional terms may apply.