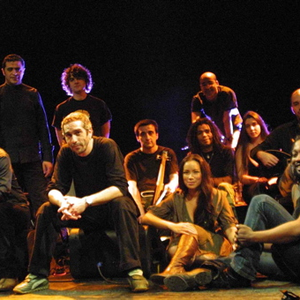 This project, conceived as a workshop or work in progress, is defined as a collective of musicians in constant change and evolution. It is opened to all artists from different parts of the World, who cross paths in the Raval, the most ethnically diverse district of Barcelona. It has been 5 years since the inception of 08001, a number that refers to the first area code of Barcelona and also the one corresponding to the emblematic district of the Raval. The headquarters of the project is the 08001 studio, where all rehearsals and recording take place. It has been so since the very beginning as the idea was to forge and maintain a genuine sound. They continue to work slowly at “home”, which is where the best dishes are cooked. Over a dozen artists from different ethnicities and cultures pass through Julian’s studio to meet, find, try, taste, exchange, fuse, create and blend… resulting in a distinct and unmistakable 08 sound, which encompasses the essence of the surroundings. In 08001, bios and CVs don’t matter. What is important is the creativity and the music that flows free, full of life. The live staging combines a show which blends the performance of numerous artists together with a visual screen show. 08001’s made its debut in the very heart of district that saw their birth, during the SONAR, the International Advanced Music and Multimedia Art Festival in Barcelona. Right after, they embarked in an intense tournee around Spain and various parts of Europe, which spawned numerous reviews including coverage in Time magazine, which highlighted 08001 as one of the more interesting and prominent bands coming out of Spain at the moment. They also received the Impala award after selling over 30.000 units of their independently released first record Raval ta Joie. VORAGINE (WorkinProgress Records) is 08001’s new album, soon to be commercially released in record stores and iTunes at the end of June 2007. Read more on Last.fm. User-contributed text is available under the Creative Commons By-SA License; additional terms may apply.