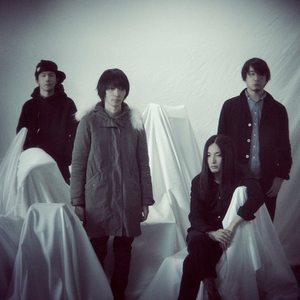 In 1998, Riki Kinoshita moved from Osaka to Tokyo to start a solo career and after the release of his first and sold out mini-album, TEENAGE LAST in 1999, he decided to start the band ART-SCHOOL in March 2000, with his support musicians at that time Hinata (bass), Sakurai (drums) and later Oyama (guitar). The same month, they gave a concert in the Shimokitazawa Shelter. Their first mini album SONIC DEAD KIDS was released on September 8th, followed by their single-tape and two other releases the following year. Together with the band Straightener they released a split-cassette on March 6th, 2002, which has been long sold out since its release. The band's success continued into summer for two main reasons; first because of their appearance at the Fuji Rock Festival and second because of their contract with the major label Toshiba EMI. ART-SCHOOL released a new single that October and their first full-length album, REQUIEM FOR INNOCENCE, the following November. Their first nationwide tour took place in January 2003, with the gig in the Shibuya Club Quattro being sold out on the first day. EVIL, their second major single, was released in April and again they were part of a big Japanese rock festival, the Japan Circuit in June. The following tour left a great impression and ensured the band's future success. The year continued with more releases and, unfortunately, ended with Oyama and Hinata leaving the band in December. 2004 began with the release of their first live album BOYS DON'T CRY in March. The support musicians Masafumi Todaka (guitar) and Takeshi Uno (bass) became official band members and would become a big influence on Art-School's future musical progress. To celebrate this new formation, they gave a free concert in the Shibuya O-East, which was attended by 10,000 people. Their following releases were successful as well and made it possible for them to play at several festivals and events. They changed their label to Pony Records in the middle of the year, published a new mini-album and spent some time in Glasgow, Scottland to record their third full-studio album PARADISE LOST. The following PARADISE LOST TOUR 2005 provided enough material for their fist live DVD, sleep flowers, which was released in December 2005. ART-SCHOOL continued to go strong from 2006 to 2007 with the release of two singles and two albums. Along with their releases, they kept themselves busy with various live shows and ended 2007 with a coupling tour with OGRE YOU ASSHOLE. As for 2008, ART-SCHOOL released ILLMATIC BABY, a new mini-album which was produced by Yutaka Furukawa of DOPING PANDA. ART-SCHOOL then embarked on a tour with DOPING PANDA, OGRE YOU ASSHOLE, the telephones, THE NOVEMBERS, UNCHAIN and VOLA & THE ORIENTAL MACHINE as guests. In April of 2009, Yuichi Sakurai (Drums) announced that he is leaving the band to form his own. ART-SCHOOL's last show with Sakurai was on the 8th May 2009 at the Chiba LOOK Livehouse. ART-SCHOOL have since released two more albums, 2009's full-length 14SOULS and 2010's mini-album Anesthesia. Takeshi Uno (Bass) and Hiroyuki Suzuki (Drums) left the band in December 2011 and started other projects. Then On May 21st, the band held a free live, ‘DAY OF THE DEAD‘, at Shibuya CLUB QUATTRO with their new support members, bassist Nakao Kentaro (from Crypt City) and drummer Fujita Isamu (from MO'SOME TONEBENDER). In August 2012 they released a new album called "BABY ACID BABY" under Ki/oon (means sony.jp) and continue in March 2013 they released a mini album called "The Alchemist" Members: Riki Kinoshita (木下 理樹) － vocals/guitars Masafumi Todaka (戸高 賢史) － guitars Read more on Last.fm. User-contributed text is available under the Creative Commons By-SA License; additional terms may apply.