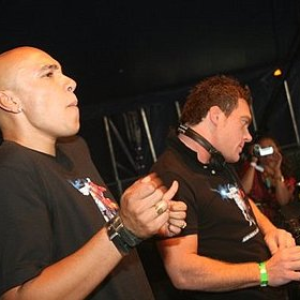 Biography Abyss & Judge “The Abyss & Judge sound is very diverse,” says DJ/producer Gevrey Heijnes, “but catchy as well. We prefer hardstyle with great melodies, heavy basses and pounding kicks.” He should know, since he forms the Abyss & Judge duo together with fellow DJ/Producer Justin Putuhena. Abyss: Gevrey decided to get involved with the magic of vinyl at the age of 15. Records and mixing tracks were really something to focus on and so oldstyle, hardcore and houseclassics (Late 80’s and early 90’s) were the start in his repertoire. More people started to notice Gevrey’s unique skills and passion to always look for exciting new musical paths. So it was no surprise when the hardstyle sound started to conquer the scene, Gevrey was on the forefront. After sending a mix-cd to Q-dance Gevrey performed in the talent room of Qlubtempo #5. After this, things just got better and Gevrey played on several major events in Holland; Matrixx, QrimeTime, DefQon One Festival, Qlimax(VIP), X-Qlusive labels, Seqtion and several other local/national and international events (Lloret De Mar, Callela, Mallorca). Since 2003, Gevrey (co) produced a handful of well received productions on labels such as Straight On Recordings and DJS Records. Judge: Justin started playing the piano when he was just 5 years old. He got hooked on dance music at a young age. But when he got his hands on a set of two turntables and a mixer, Justin found his life’s devotion. He started to perform at local parties. At the age of 15 Justin also started producing tracks. In June 2004 Justin got a call from Q-Dance that he was invited to play at the Deqon1 talent night at Q-Beach after sending a mix-cd. After that things were going forward with Justin and he released his first record at DJS Records. In 2006 Justin decided to learn more about producing, mixing and mastering and he studied “Studio Engineering and Producing” at the Sound Academy in Utrecht. Gevrey and Justin met on a gig in Purmerend in 2006. They joined their forces witch led to the release “Bassreactor” with on the B-side “We're back and Syndicate” in 2007. They decided to form the DJ/producer duo Abyss & Judge. In 2008 Abyss & Judge signed to the Dutch Master Works label, home of many dance floor heavyweights including Showtek, Southstylers and Dutch Master. The duo have made a lasting impact with their two releases “Hardstyle Revolution/One Life” and “Rapture/Shadows”. “But with three EP’s under our belt and a series of new releases scheduled for 2009 we’re happy that we’re part of one of the leading hardstyle labels in the world,” says Justin with a happy smile on his face. You can also find Abyss & Judge on the following sites: http://www.abyss-judge.nl http://www.myspace.com/abyssjudge http://nl-nl.facebook.com/pages/Abyss-Judge/47927886173 http://partyflock.nl/artist/44837:Abyss_amp_Judge.html http://www.netlog.com/abyssjudge http://abyss-judge.hyves.nl/ Read more on Last.fm. User-contributed text is available under the Creative Commons By-SA License; additional terms may apply.