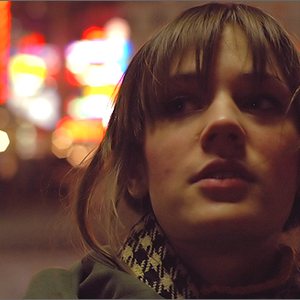 In 1983, the very same year Kraftwerk released Tour de France and Dolly Mixture released Demonstration Tapes, Sarah Nyberg Pergament was born in Trelleborg, Sweden. She moved to Gothenburg at an early age and with both of her parents working as professional musicians she early developed a strong sense and great passion for music and art. After three years of design and artschool and appearances in various musical contexts Sarah sat down by the computer and started writing and producing her own songs. Sometime in the early winter of 2002 the music started to take form and she named her one-woman project Action Biker after the classic C64-game. During 2002, Action Biker played some club gigs and at the swedish twee festival Mitt Bästa Liv. Sarah moved to Paris, France where she studied french, did some sporadic DJ:ing and refilled her energy and inspiration. She returned to Gothenburg, Sweden for a year, happier than ever. Since autumn 2003, she was situated in Stockholm, Sweden where she co wrote "My Everything" with Lars Blek. She also joined a band called Kissing Mirrors. Collaboration with Tomas Bodén of Differnet resulted in dance project Flow Flux Clan, first release was a cover of The Cures "Fascination Street". She didn't do alot of new Action Biker music, but lately things are happening and she did music for a short movie and has started to work on new material for Action Biker. She also has been collaborating with Kevin Wright, known from Always and Mr Wright, during 2006. They call their project "The Dreamers". And! The debut is out now, released by Friendly Noise and cd and mp3s are available through www.friendlynoise.se. www.actionbiker.tk Read more on Last.fm. User-contributed text is available under the Creative Commons By-SA License; additional terms may apply.