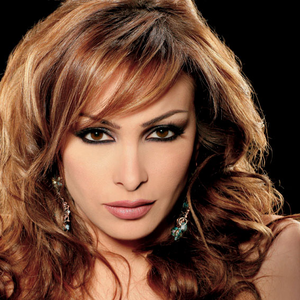 Amal Hijazi (Arabic:أمل حجازى) (born on 20 February 1977 in Beirut, Lebanon) is a Lebanese singer, model and pop icon. She is currently one of the most active Lebanese singers and has given a number of concerts throughout the world and has made countless TV appearances. After her lengthy career as a fashion model, Hijazi released her first single was called "Halan" ("Right Away") in 2000, it was followed by her second single "Rayyah Balak" ("Put Your Mind at Ease") one year later, for which she also shot a music video. On the same year her debut album "Akher Gharam" including the hit single "Rayyah Balak" was produced by Dilara Master Production and distributed by Music Master. The critics were thrilled and her first step on the way to becoming a super-star was a hit. It became one of the biggest selling albums of the year, ranking on number eight Official Sales charts published by the Chart Magazine. The debut album ranked eighth on the official sales charts, the album included numerous hits singles like "Akher Gharam" ("Last Love"), "Ghanneit" ("I Sang") and "Rayyah Balak" ("Put Your Mind at Ease"), which were kept Amal on the Top Twenty Charts for six months. Yet her first steps in live performances were rather influenced by stage fright, even though her modeling experience gave her the ability to capture the audience. But soon she overcame her fears and on she went with her live performances. Not much later, in July 2001, Amal performed as the opening artist for Raï star Faudel at La Marina in Lebanon, which was her first time in Beirut after her concerts in Dubai. A short while ago Amal signed a contract, which should bring her into a new light and increase her popularity all over the Arab world. She released her second album Zaman in mid 2002 with even greater success. The album released four number one hit singles, Zaman, Oulhali, Einak and Romansyia catapulting her to phenomenal success. A third album Bedawwar A Albi was released in early 2004 followed by the release of her fourth album Baya al Ward in 2006. The album's breakthrough of the same name caused the entertainer to face negative critical publicity and a number of controversies. The career of Amal Hijazi is surely not over yet. With her passionate voice and her unique appearance she may possibly climb the ladder till the very top Read more on Last.fm. User-contributed text is available under the Creative Commons By-SA License; additional terms may apply.