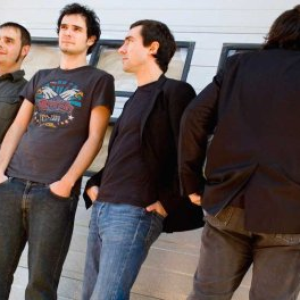 Components: Francisco Fernández Tito Valdés Paco Martínez Paco Loco City: Gijón (Spain) Style: Pop-Rock Record: Astro Discos After ten years in active-duty, five albums (six if we counted its collaboration with Steve Wynn) and a considerable success, Australian Blonde have practically happened through everything what can pass a group of rock in Spain, and without losing a coherence apex. The ability not to resign to an own musical identity, knowing to evolve independently of fashions, successes or failures, has turned to them classic ones in life. From a successful debut with the mythical album "Pop Pizza" (Subterfuge, 1993), four albums and many songs later, Australian Blonde they have not turned aside an apex of its initial search of the perfect pop song. The maturity has brought with himself a capacity of unsuspected emotion, but in spite of everything, they have not moved a centimeter of its way. The one that now it is going to be fifth album of the band demonstrates that the years have happened for good, and that its quality of new classic is not something given by the successes, but by genuine talent. Exactly the talent necessary to create a collection of subjects varied enough as to evoke in a same disc the best moments of Ray Davies or the pildorazos more vitaminados of the new wave, happening through modernized sounds country, that reveal a constant restlessness to investigate each new variant of the American pop-rock. "Lay it on the Line" is a disc able to captivate simultaneously to the most demanding followers of the pop one with guitars and to the finders of immediate refrains; but in any case, with a content and an elaboration that any previous disc of Australian Blonde surpasses of distant spot: that is the maturity. Maturity that in this occasion comes accompanied from fecundity, because aside from the fifteen subjects which they compose the album one second "virtual" part exists: nothing less than another album with eight unpublished and complementary songs to the previous ones, that all the buyers of the disc will be able to unload gratuitously in www.ritmic.com. Key, which it accompanies the disc that is acquired in the store, is enough to accede to this great gift for the buyers. The song that gives title to the album will be in addition first single extraido, of which a paper clip will be rolled, and summarizes in its three minutes everything what there is again in Australian Blonde without has given up to anything of good the previous thing: new voices (Tito, bear of the group, receives the new protagonism like Co-vocalista), great wealth of musical adjustments (prudent, winds, keyboards...), new sounds (a turn towards the rock and country of its pop classic one) and, in general, excellent new songs that demonstrate the validity of a proposal to which by pure coherence, it is only possible to be described like classic modern. Read more on Last.fm. User-contributed text is available under the Creative Commons By-SA License; additional terms may apply.