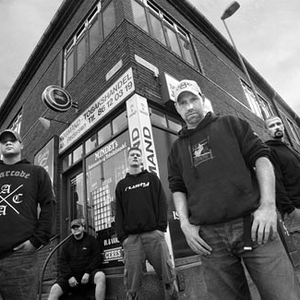 There are at least two artists with this name: 1) The band started out in 1995. They released their debut cd, 'Hard Jet Super Flash', in 1997. The cd got really great coverage throughout the press. Most of '98 went on with what the do best: partying and supporting AGF (their local football team) + an occasional rehearsal session and a few shows. However, by August '98 gravity of reality made them realize that if this band wanted to make it a bit further than just ok, some adjustments had to be carried out. A real hard decision was to be made. Thus, on their knees, it could turn either way: a total split or a swift recruitment of new blood. A new guitarplayer, Dr. Jay, was found and a new leadsinger, Butch. Butch has added a lot of full throat lungs to the band's approach and obviously; tightness. Early '99: intense rehearsing prior to the recordings of 'Beerserk'. Recordings and mixing took place during February/March '99. In May '99 Barcode played their first big international tour, supporting Madball on their "Look My Way" European tour. Summer 2000 Barcode Appeared at Germany's prestigious With Full Force Festival, alongside labelmates Disrespect. 2001: Originally, the new album 'Barcode Hardcore' was scheduled for a late 2000/early 2001 release, however, massive bass & drum difficulties forced them to drop touring and songwriting and instead focus on auditioning bass and drum candidates. BUT, the wait was worthwile, 'cuz with new bass player, Snik1, and new drummer, Snick2, the unit is now stronger than ever. Barcode's new album "Hardcore" was released on the 15 th. of january 2002. Since then the band have recorded some covermaterial and toured. DISCOGRAPHY: Hard Jet Super Flash (97) Beerserk (99) Hardcore (02) Showdown (05) The band named Barcode that is on the split 7" with Ex Ignota is a different band than the band by the name of Barcode that has its presence here. The Barcode on the 7" with Ex Ignota was started in September (or was it earlier) 1994 and lasted until July 1995 in Ithaca, New York. 2) Metal / Hardcore / Rap band Barcode was formed in Belgrade, Serbia, sometime in the year 2000. When SubZero (guitars and vocals) and Dushko (drums) showed interest to join the band that Cike, Brancode and Vaz (vocals) and Mrdja (bass) were forming. With such talented musicians, a large amount of mutual understanding in their individual style diversity, lots of good songs were made in short periods of time. Few months after the band was formed Mrdja had to quit the band due to his evolving obligations in the Belgrade philharmonic orchestra. Far steps in on the bass.2001, Vaz quits also the band because of his professional obligations. Short after, feeling that they have reached a certain level of maturity as a band, Barcode begins to play gigs in Serbia, and is very well accepted by the audience. They record the tune called Holding me down, released on Forces of anger, a Multimedia records (Universals label) CD. Between 2001 and 2005, Barcode has played concerts with many bands, such as Good eye closed, Tea Break, Yobo, Eyesburn, Flip out, Impurita and many others. In April 2005 Barcode is facing the final breakdown as Dushko leaves the band. Few months of agony are instead of them, because no drummer was satisfying their demanding needs, until young Johnny stepped up out of nowhere and completely amazed the entire crew with his energy and maturity on the drums. November 2005, Barcode finally enters the studio (Akademija) to record a full 12 track album. With powerful lyrics and even more powerful and moving music they describe the reality surrounding them. A must listen to tracks are Confusion, Paranoia, Holding me down . During its scene career Barcode played among all its gigs on some festivals such as RDzDz Festival, Out Of Melody Fest, NBG summer festival, opened up the 25th anniversary of Radio 202 and many others. Read more on Last.fm. User-contributed text is available under the Creative Commons By-SA License; additional terms may apply.