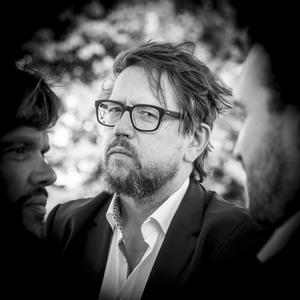 There are at least three artists named Bauer: 1. Bauer is the artist name of Amsterdam-based musician, singer and songwriter, Berend Dubbe (once the drummer of indie rockers, Bettie Serveert). Bauer started out as a one-man project in 1999 and is, as of 2016, once again a one-man project (with a backing band when performing live). Between 2000 and 2006 Bauer was presented as a chamber pop duo, comprised of Dubbe and Sonja van Hamel. Bauer's elegantly arranged chamber pop is strongly influenced by artists such as Brian Wilson, Burt Bacharach, Stereolab and Scott Walker. 'Bauer Mark I' released three studio albums, the latter two as a duo: On The Move (1999), Can't Stop Singing (2000) and Baueresque (2004). Bauer's final recording as a duo was a live album with Amsterdam's Metropole Orchestra, entitled The Bauer Melody Of 2006. After a ten-year hiatus 'Bauer Mark II' released Eyes Fully Open (2016), an orchestral pop album by Berend Dubbe as solo-artist, which he brings to the stage with his newly recruited band. Bauer was awarded a Zilveren Harp ('Silver Harp'), a prestigious music prize in The Netherlands. 2. Bauer is an Argentinian band. They released one EP (Bauer, 2003) and two LP's (Astronauta olvidado, 2004; En Otra Ciudad, 2006). The 72-minute trip that was Astronauta olvidado has been described as post-rock, with traces of Radiohead, Mogwai, Sigur Rós and Pink Floyd psychedelia. En Otra Ciudad was more powerful, with echoes of Led Zeppelin and Deep Purple, rather than Sigur Rós. Band members are Ezequiel Esposito, Federico Pérez Losada, Gabriel Ardanaz, Julián Paz and Martín Mykietiw. 3. Bauer is an indie band from the north of England. Having shared stages with artists such as Snow Patrol, The Ordinary Boys, Stephen Fretwell, Andy Rourke & Mike Joyce (The Smiths), Brendan Benson and Long-View, the band released one EP (The Bauer EP 2006) and one single (Starting Again). Read more on Last.fm. User-contributed text is available under the Creative Commons By-SA License; additional terms may apply.