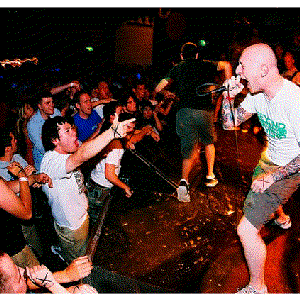 There are 5 bands playing under the name Betrayed. 1)Betrayed were a straight edge band who played fast and aggressive Melodic Hardcore. The band was made up of Champion guitarist Aram Arslanian on vocals and drummer Todd Preboski, as well as former Carry On members Todd Jones (guitar) and Greg Bacon (bass). Their debut ‘Addiction’ EP, released in 2005 on the Bridge 9 label, features six addictive straight edge anthems. In 2006, Betrayed released a split EP with Champion on Rivalry Records with 3 songs on it. In 2006, the band called it quits, after only two years and just recently releasing their Equal Vision debut Substance. 2)A thrash metal band from Chile, formed in 1988. They released a demo named ‘our option’ in 1989 and a full-length named ‘1879 Tales Of War’ in 1990. Their lyrics are about the war of the pacific (1879-1884). They are still active today, take a look: http://www.myspace.com/betrayedchile 3)A black-thrash metal from Germany, formed in 1996. Released a few demos and splits, EP and MCD. http://www.myspace.com/betrayedgermany 4)A hardcore punk band from the Philippines who existed from 1986 to 1987. Betrayed was formed in 1980 by three High School friends in Queens, N.Y. They were Eddie Siojo (vocals), Dave Vote, and Steve. The name of the group was taken from a lyric from the song “Rough Trade” by Stiff Little Fingers. They recorded 4 songs (which ended up on compilations in the US), before Eddie leaves for the Philippines. It is now 1982 and Buddy Trinidad (Guitarist), goes to the Philippines to attend the University of the Philippines (U.P.). Buddy and David Reyes (Drums) get together in David’s garage and do Ramones covers. They form a band called Noize and do one gig at U.P.’s Sunken Garden playing four songs. David introduces Buddy to Eddie Siojo, the original vocalist for Betrayed later that year. Eddie also attends U.P. They eventually form a group called Jump Boys taken from a song by the Undertones. They do one gig in Merville, Philippines. During practice one day, they do some original song by Betrayed, Eddie’s old band from Queens. Eddie suggests they add these songs to their repetoire and change their name to Betrayed. They start doing gigs around Manila including the Brave New World concert series promoted by Tommy Tanchanco (Third World Chaos), founder of the tape label Twisted Red Cross (TRC). It is now 1983 and Chris Carire, a friend of Eddie’s, takes over on bass so Eddie can concentrate on singing. David (drums) chooses to leave and is replaced by Carl Avecilla. They go into the studio and record eight songs, some of which appear on the A side of their debut album on TRC. The songs are heavily influenced by UK Punk and Reggae. They even do a Damned cover, “Love song”. More gigs follow including Crappy Halloween, Brave New World PT II and radio interviews with Howlin’ Dave, a famous local Manila D.J. Summer 1984 Eddie, Chris, and Carl move back to the States for good. Buddy manages to replace the departed members with new ones, Dominic Gamboa (vocals), Boyet Miguel (bass), and Manny Pagsuyuin (drums). This reconstituted Betrayed goes into the studio and records seven songs, some of which comprise the B side of their debut album. The songs still have the stong UK punk influence, but songs such as “Kids Will Unite” and “Fight, Fight” have a definite Hardcore sound. More gigs follow with Betrayed being one of the first and last bands to play at Katrina’s, a local pub that caters to Punk bands. Buddy leaves for the U.S. on Nov 12, 1985. The cassette is finally released sometime in 1986. The remaining members get Je Bautista to play bass and Boyet moves to guitar. Dominic (vocals) leaves and forms a reggae group called Tropical Depression. Betrayed remains inactive until Buddy returns to the Philippines in 1995. They do one gig at a local rock club called Club Dredd on January 14th, 1996. In October of that year Buddy and Eddie the original vocalist, return to the U.S. for a couple of months to record an album for BMG with Mark Miller (guitar) and Todd Gaitors (drums). Buddy returns to the Philippines in December of 1998 and reforms the group yet again. Current lineup is Boyet Miguel (guitar), Je Bautista (bass), Manny Paguyunin (drums), and Buddy (guitar and vocals). They are currently finishing songs for a new album to be released in March of 2003. Buddy is in current negotiations with BMG on releasing the old Betrayed recordings. 5) The english Oi! band from Folkestone who played between 1984 and 1990. They are most well known for their inclusion on the re-issue of the Skins’N’Punks Volume 2 album with The Strike. Read more on Last.fm. User-contributed text is available under the Creative Commons By-SA License; additional terms may apply.