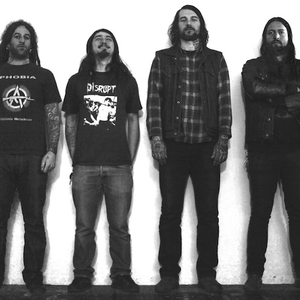 Book Of Black Earth formed in late 2003 when TJ Cowgill (guitar) and Hank Guthrie (keyboards) joined with Joe Axler (Skarp, Splatterhouse) on drums, Larry Perrigo on bass (Wormwood), and Rebekah Dunbar on guitar and wrote three songs for a demo which was released in 2004 on their own label Cryptstyle Records. That was limited to 150 copies. Two songs from that demo later appeared on a split with Fall Of The Bastards which was released in 2005 on Evil Morgue Records. The first full length entitled "The Feast" was recorded in 2006 with Jesse at the Autopsy Room in Tacoma. It led to Book signing a deal with the underground heavy metal label, 20 Buck Spin. The album was also released on vinyl by Kreation Records and recieved critical acclaim from magazines and metalheads worldwide. In april of 2008 Book Of Black Earth etched a deal with Prosthetic Records and began work on their second headbanger "Horoskopus", with Producer/Engineer Chris Common (These Arms Are Snakes, Mouth of the Architect, Pelican) at Red Room Studios in Seattle, Washington. Based on the astrological origins of all religion, with an emphasis on Christianity, Horoskopus is by far the most brutal, unapologetic album the band has ever recorded. The band released their next record, "The Cold Testament", in 2011. Read more on Last.fm. User-contributed text is available under the Creative Commons By-SA License; additional terms may apply.