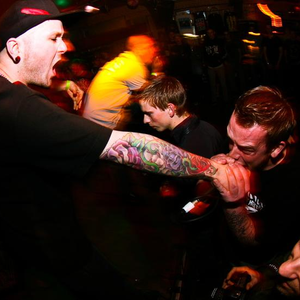 Bun Dem Out are a metal/hardcore band from London UK featuring ex and current members of knuckledust, 50 Caliber Flawless Victory and Trenchhead.They are currently signed to Rucktion Records (UK) to date they have released one Self titled Ep and one full length LP entitled 'The Few The Deep' originally on Alveran records. Their sound is heavily Slam/Death Metal influenced, and their sound is similar in vein to bands such as Shattered Realm Cold Hard Truth and Stampin' Ground. Lyrical themes include crime, police brutality, cannabis/marijuana use and state sponsored opression of working class people, most of their lyrics are in both spanish and english. Bun Dem Out do did tour very often but have played some noteworthy hardcore and metal events including pressure fest, and are generally well known in the UK and Europe. The band have now disbanded with Pierre Mendivel still fronting UK hardcore legends Knuckledust and original guitarist Charlie Wilson playing for London hardcore band TRC. Read more on Last.fm. User-contributed text is available under the Creative Commons By-SA License; additional terms may apply.