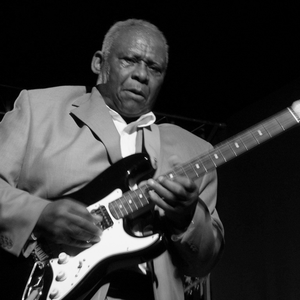 Byther Smith is a true Living Legend of the Chicago blues scene and during his long lasting career he worked with the greatest of the Chicago blues artists like Muddy Waters, Howlin' Wolf, Jimmy Reed and Otis Rush. Born in Monticello, Mississippi on April 17, 1933 young Byther Smith got his first musical experiences with gospel music, a music that he returned to at various stages of his career. As a teenager Byther moved to Arizona, working on a cattle ranch and playing with a country & western band at weekends. In 1957 he moved to Chicago at the advice of his cousin, the legendary J.B. Lenoir. He began gigging and taking guitar lessons from Robert Lockwood and Hubert Sumlin presumably on the basis that if you're going to get a guitar teacher you might as well get the best. In the early 1960's Byther Smith was working the clubs on guitar and bass both as a leader and in various bands as sideman. A group of highly prized recordings were made resulting in 45's on labels such as Bea & Baby, Cruise and Apex. In 1965 it was back to gospel with the Gospel Travellers for a time. In the 1970's he spent five years in the house band at Theresa's Tavern, which often meant playing with Junior Wells. 1979 found Byther Smith determined to make it under his own name and a steady stream of coast to coast gigging and touring commenced. He made several recordings and his releases, "Addressing the nation with the blues" (JSP) and "Housefire" and "I'm a mad man" (both on Bullseye), were very successful. Byther released three CD=s ("Mississippi Kid", AAll Night Long@ and AHold that train@) on Delmark Records. During the years Byther Smith has toured all over the world. In Europe several times, among others as a member of the Chicago Blues Festival. Byther Smith did several very successful European tours between Nov '94 and Sept '99. During these tours he performed in Holland, Belgium, Germany, France, Norway, Sweden and the UK. During these tours in headlined the Moulin Blues Festival in Ospel (NL), the Handzame Blues Festival in Belgium, Le Nuit De Blues in Sarreguemines (F) Burnley Bluesfestival (UK). Byther released two recent CD=s on Black and Tan Records; Smitty=s Blues (2001) and Throw Away The Book (2004). Read more on Last.fm. User-contributed text is available under the Creative Commons By-SA License; additional terms may apply.