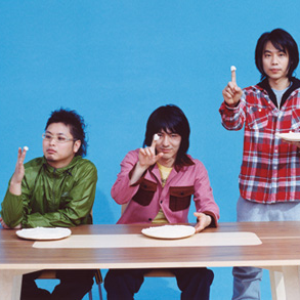 Captain Straydum (キャプテンストライダム) originally began in 1999 when two friends in the Utsunomiya University music circle, Seiya Nagatomo and Keisuke Umeda, decided to form their own band. Lack of a band name didn't stop the two from striking out as a cover band, where they tried their hands at songs by Cream and other heavy hitters from the '60s and '70s. Alas, the chops weren't yet there, driving the two to start composing their own songs. Fortune smiled on the two later that same year when their first gig was booked, necessitating a decision on a name. The first candidate suggested by Umeda - Seibu Keisatsu, after a television series of the same name - was firmly rejected by Nagatomo, and the two eventually compromised on Captain Straydum, after Keisuke Itagaki's manga entiteld Baki the Grappler, of which bother members were fans. The band gained some momentum after drummer Kikuzumi Moriyoshi joined, recruited due to the "funny faces he made while drumming", replacing the original drummer, completing the current lineup. Captain Straydum released their first demo in 2001, followed up by another in 2002, coinciding with Nagatomo leaving his job to pursue music full-time. The band spent a lot of time in auditions and contests, and signed to Kazemachi records in autumn of that year. They released their first single on the label, entitled "Mountain a Go Go" in 2003. Before nationwide release, the single was pre-released at several record stores across the country, hitting number one at the Shibuya HMV and Utsunomiya Tower Records stores. Spurred by their success, the band pressed on with the recording of their full-length, entitled Bukkororii, which was released in November, generating a wave of exposure for the single on radio and television. Since then, the band has released a steady stream of strong releases, and developed a significant fan base. Captain Straydum has also provided theme songs for the animes Naruto, Gintama, and Tenpou Ibun Ayakashi Ayashi. Read more on Last.fm. User-contributed text is available under the Creative Commons By-SA License; additional terms may apply.