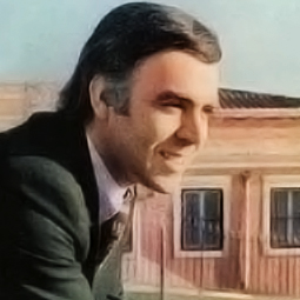 Carlos do Carmo was born in Lisbon Portugal in 1939. He was the son of Lucília do Carmo (one of the greatest fadistas of the 20th century) and Alfredo de Almeida, (bookseller and later entrepreneur in the hotel business). His parents were also the owners of the famous Lisbon restaurant "O Faia". One might say that Carlos do Carmo was raised in an artistic atmosphere. His parents' house in the old part of the city, Bairro Alto, was a place where intelectuals and artists gathered, some of the more prominent figures of Lisbon society at that time. He studied the hotel business in Switzerland. In 1964, Carlos do Carmo began one of the most solid careers in the artistic panorama of Portugal... When he returned to Lisbon from Switzerland he entered the hotel business with his parents, and took the reigns of "Casa de Fado" which they had founded, using all of the ideas and techniques that he learned in Switzerland. After the death of his father, Carlos do Carmo became the owner, and thanks to his merits and good luck, made "Casa de Fado" the best in Lisbon. But music was ever present in him, and he recorded one of his mother's songs, "Loucura", at the request of Mário Simões almost on a lark. The success of this experience was so great that the destiny of Carlos do Carmo could not possibly be delayed a minute more. The opportunity to record his first album came quickly, and in 1964 he recorded " Estranha Forma de Vida". His way of singing was different, his personal style unmistakable, he was the one that fado was waiting for to carry on the tradition, and there was a certainty that a new star had been born. From that moment on, success was part of his life, each and every fado that he sang, every album he recorded, every performance he gave, corresponded with yet another hit. All of his albums up to the present day have been cherished and the sales of his television performances are now part of fado history, recognized for their high quality, and for the inovative spirit that each one transmits. "Por morrer uma andorinha", "Duas lágrimas de orvalho", "Bairro Alto", "Gaivota", "Canoas do Tejo", "Os Putos", "Lisboa Menina e Moça" e "Estrela da Tarde", are some of the biggest hits of his career. Because of a desire to maintain a purely artistic career for such a long time, his artistic references include quite diverse artists as Frank Sinatra, Jaques Brel, Elis Regina and José Afonso. The international circulation of his work was driven, as he always likes to affirm, "By those Portuguese who leave my country in search of a better life, and who have passed my works in to the hands of entrepreneurs and cultural agents of the various countries where they reside". He has sung on 5 continents, his performances at the "Olympia" in paris, the opera houses of Frankfurt and Wiesbaden, the Canecão in Rio de Janeiro, the "Savoy" in Helsinki, the Auditório Nacional in madrid, the Teatro da Rainha in Haia, the theater of Saint Petersburgh, the "Place des Arts" in Montreal, the Tivoli in Copenhagen, and the Memorial da América latina in São Paulo are some of the finest moments of his career. His performances throughout Portugal at the Mosteiro dos Jerónimos, the Fundação Gulbenkian, the Coliseu dos Recreios, the Casino do Estoril, and at the Centro Cultural de Belém make a difference in the cultural level of the country. The number of honours and awards he has received to this day are innumerable, from being named an honorary citizen of the city of Rio De Janeiro, member of the honor of Claustro Ibero-Americano das Artes, to the diploma accorded him by the senate of Rhode Island in the U.S. for his contribution to the propagation of Portuguese music, to the golden globe. He also figures as a pioneer in the new Portuguese discography, due to his album "Um Homem no País", the first cd to be edited by an artist in Portugal. Carlos do Carmo knows the importance of family life, he's been married since 1964 having 3 children, as fruit of this union, one daughter and 2 sons, who maintain a close relationship with him. It's not always easy to juggle life as a family man with the life of a world traveling artist. He persues the realization of this dream, because he considers the union of family to be important. He considers himself the first link in a chain of individual connections. He values being with friends, and enjoys making new friends, maintaining an high level of quality in his artistic life. Carlos do Carmo is an artist who has certainly already attained some of his goals, aiming for a public who holds him in high esteem, great respect, apreciating in him not only his qualities as a musician, but also those of an artist interested in the evolution of the music of his homeland, and who believes in the evolution of man as a creature who can embrace the whole world in it's diversity. Read more on Last.fm. User-contributed text is available under the Creative Commons By-SA License; additional terms may apply.