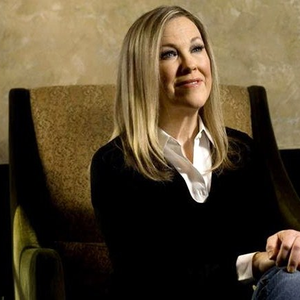 Catherine Anne O'Hara (born March 4, 1954) is a Canadian-American Emmy and Gemini Award-winning actress and comedienne. She is well known for her comedy work on SCTV and for her film roles as Delia Deetz in Beetlejuice, Kate McCallister in Home Alone, Sally in The Nightmare Before Christmas and the series of mockumentary films written and directed by Christopher Guest. Career O'Hara was born and raised in Toronto, Ontario to a large Irish Catholic family. She started her acting career in 1974 as a cast member of The Second City in Toronto. She was an understudy for Gilda Radner until she left for Saturday Night Live. Two years later, this theatre troupe created the television series SCTV, on which she became a regular performer. Memorable O'Hara characterizations on the show included Las Vegas scorcher (I wanna bear your children!) Lola Heatherton, buzzer-happy game show contestant Margaret Meehan, raunchy nightclub comedian Dusty Towne, soap opera seductress Sue Ellen and stage actress Sue Bopper Simpson. In the late 1970s, she did various voice-overs for a number of cartoons, which would continue throughout her career. During a short time in the early 80's when SCTV was in between network deals, she was hired to replace Ann Risley when Saturday Night Live was being retooled in 1981. However, she quit the show without ever having made an appearance on it, choosing to go back to SCTV when the show signed on with NBC and was back on the air. Her SNL position was then given to fellow Canadian Robin Duke, who had also replaced O'Hara for a season on SCTV. She had roles in many films over the years, including Martin Scorsese's After Hours in 1985, as well as parts in two Tim Burton films, Beetlejuice and The Nightmare Before Christmas. She played Kate McCallister in the first two Home Alone films. In 2006, she starred in her fourth Christopher Guest film, For Your Consideration (following Waiting for Guffman, Best in Show, and A Mighty Wind). On June 9, 2007, she was inducted into Canada's Walk of Fame. In May 2008, it was announced that she has signed on to star in the upcoming ABC dramedy Good Behavior. Personal life A naturalized U.S. citizen, she married production designer/director Bo Welch in 1992 and has two sons, Matthew (b.1994) and Luke (b.1997). She is the sister of critically-acclaimed singer-songwriter Mary Margaret O'Hara, though she is a singer-songwriter in her own right, having written and performed songs in the 2003 film A Mighty Wind. She has a condition known as Dextrocardia with situs inversus. Films Year Film title Character or Role 1983 Rock & Rule Aunt Edith 1985 After Hours Gail 1988 Beetlejuice Delia Deetz 1990 Home Alone Kate McCallister 1990 Betsy's Wedding Gloria Henner 1990 Dick Tracy Texie Garcia 1990 Little Vegas Lexie 1992 Home Alone 2: Lost in New York Kate McCallister 1992 There Goes the Neighborhood Jessie Lodge 1993 The Nightmare Before Christmas Sally and Shock (both speaking and singing) 1994 Little Giants Young Boy's Mother 1994 A Simple Twist of Fate Mrs. Simon 1994 Wyatt Earp Allie Earp 1994 The Paper Susan 1995 Tall Tale Calamity Jane 1996 The Last of the High Kings Cathleen 1996 Waiting for Guffman Sheila Albertson 1997 Hope (TV) Muriel Macswain 1997 Pippi Longstocking voice of Mrs. Prysselius 1999 Late Last Night (TV) the Shrink 1998 Home Fries Mrs. Lever 1999 Bartok the Magnificent voice of Ludmilla 1999 The Life Before This Sheena 2000 Edwurd Fudwupper Fibbed Big voice 2000 Best in Show Cookie Guggelman Fleck 2001 Speaking of Sex Connie Barker 2001 Committed (TV Series) 2002 Orange County Cindy Beugler 2003 A Mighty Wind Mickey Crabbe 2004 Surviving Christmas Christine Valco 2004 The Wool Cap Gloria 2004 Lemony Snicket's A Series of Unfortunate Events Justice Strauss 2005 Chicken Little Tina 2006 For Your Consideration Marilyn Hack 2006 Monster House DJ's Mother 2006 Brother Bear 2 Kata 2006 Over The Hedge Penny 2008 Penelope Jessica Wilhern 2009 Farlanders TBA 2009 Where the Wild Things Are Judith Read more on Last.fm. User-contributed text is available under the Creative Commons By-SA License; additional terms may apply.