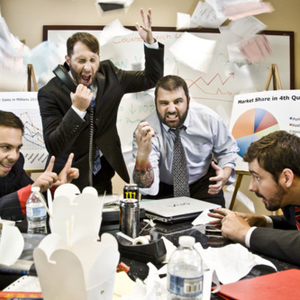 It’s a bone chillingly cold early winter night on the streets of Chicago. The heavens can’t seem to decide between a light dusting of snow or a penetrating frozen rain. Arriving at the scene of their performance for the evening are the four members of Counterpunch, who are greeted by an all too familiar foe. Three stories of steep, narrow, foreboding stairs coated with a generous layer of ice, no elevator, and 1,500 lbs of equipment. Let the fun times begin. “Well, let’s get to it,” Eric says pointedly, showing an understandable lack of enthusiasm toward the daunting task at hand. “Should I wake sleeping beauty?” chimes in Jared, referring to Richo, who’s sleeping soundly in the van with a fever of 102. “Nah, he needs his beauty sleep. Let him get a few extra minutes in, he’s going to need it tonight,” chuckles Eric, as the first piece of gear begins its journey up the stairway at Subterranean. Not mother nature, not the flu, and definitely not the stairs. Nothing can get in between them and their chance to rock the faces of the kids forming the line outside, each one fighting for a spot under the awning. The whole scenario is a perfect metaphor for the way Counterpunch conducts business. Speed bumps and hurdles are met with perseverance and a dash of humor. In winter of 2006, the band teamed up with Radtone Records in Japan to release their debut full length. They self-released the record in the US the following spring, accompanied by a steady diet of touring and shameless self-promotion. Through their grassroots advertising campaign and a lot of hours spent in the van, they were able to sell out of the first pressing. Almost all of the CDs were sold off the stage, with some digital downloads in the mix as well. To date Counterpunch has sold over 4,500 hard copies of their first CD between the US and Japan alone. In the last six years, Counterpunch has toured across the United States countless times, and has been in regular rotation on local, college, and internet radio stations. They have shared the stage with the likes of Rise Against, Strung Out, Death By Stereo, The Vandals, A Wilhelm Scream, The Swellers, Only Crime, The Loved Ones, Much The Same, and Alkaline Trio to name a few. This spring, Counterpunch has once again teamed up with Radtone Records to proudly release their new full length “Heroes & Ghosts” February 10th. The album is a huge step forward for the band and is packed with thirteen tracks of fist pounding punk rock. Whether you prefer the arena inspired sound of the album ending song So Long with its soaring melodies and soft piano or the hard driving title track, this album feels like a rollercoaster from start to finish. It was produced and engineered by Mark Michalik at Drasik Studios in Chicago, IL most recently accredited with recording and producing the new Swellers album. Following the release of their new album, CP plans on extensive touring with stops in Japan, Europe, and Canada with a heavy helping of promotion and support in the United States. Whether three kids or three thousand show up to the show, you can guarantee that they will all leave with a smile on their face. It’s with that heart on your sleeve mentality that Counterpunch approaches every situation, and you can definitely see that they love what they do. Eric - Guitar/vocals Jared – Bass/Vocals Brian – Guitar/Vocals Richo – Drums Website: www.counterpunchrock.com Myspace: www.myspace.com/counterpunch email: eric@counterpunchrock.com Read more on Last.fm. User-contributed text is available under the Creative Commons By-SA License; additional terms may apply.