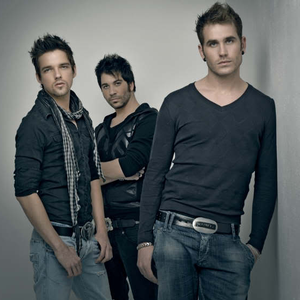 D'Nash is a Spanish boyband formed in 2005, originating from Madrid. The band consists of Esteban Piñero Camacho (Basty), Michael Hennet Sotomayor (Mikel) and Francisco Javier Álvarez Colinet (Javi). They released their debut album Capaz de Todo in March 2006, but achieved fame a year after because of their participation in the Eurovision Song Contest 2007, in which they represented Spain with the song I Love You Mi Vida, getting the 20th place in 24 participants. Their second album, Todo va a cambiar was released in December 2007. Currently, the trio is doing a promotion tour for their third album, Garabatos, which was released on March 25, 2011. Previously, D'Nash counted with the participation of Antonio Martos Ortiz (known as Ony), who left the band to serve as a choreographer in Nacho Cano's musical "A". In 2005, Mikel, Basty, Javi and Ony came together to begin his career as NASH. Producers Carlos Quintero and Mar de Pablos created the Jamm Records label, with which the group signed a five-year contract. Following the success of bands like Take That or Backstreet Boys, the record company wanted "more Spanish" the phenomenon of boy bands. The band adopted a style based on genres such as Pop, R & B and Dance, with major influences by artists like Luis Fonsi , Justin Timberlake or Michael Jackson. Their debut single, capable of anything, was released in January 2006. The self-titled album was released on March 27, 2006 by Caes Records, getting into the official list of sales in Spain (PROMUSICAE) although in very low positions. The album sold over 30,000 copies, though less than the amount needed to get gold. Later, the label would release the re-release of his album, with two new songs and a DVD of music videos released to date. Furthermore, the disc was also published in Portugal and Andorra. In 2007, Nash signed up as participants in the contest of TVE, Mision Eurovision contest to select the representative of Spain in the 52 th edition of the Festival Song Contest. The group won the January 23, 2007 the third show of the program going directly to the semifinal of the program, which represented a version of Stand By Me. In the semifinal, won a second place finish gave him a place in the grand final time he sang the title track to their album Capable of Everything [/ album]. In the final of Eurovision Mission artists with Nash performed five songs: Looking for a girl, I love you my life, The queen of the night, Your voice is off and a tear. Finally, Nash took victory in interpreting my life I love you, song composed by Tony Sanchez Ohlson, Rebeca Pous del Toro and Thomas G: son. For the band formed by Ony, Mikel, Basty and Javi, I love you my life was his favorite song from the beginning, as Basty himself admitted a few days after getting his ticket to Helsinki, "is the song that we impact, which we liked. Thinking about the Festival, we felt it was the song that lent itself more and more results can be and we can take our roll "[citation needed]. In March 2007, due to problems in registering the name Nash, decided to change it to D'Nash [/ artist]. That same month, Antonio Abalos, his manager, decides to terminate his employment with the group. Spain ranks directly to the end of the Festival Song Contest, so D'Nash should not participate in the semifinal of the competition. The band performed on May 12, 2007 at the Helsinki Arena Helsinki, Finland, in the second position. Spain received a total of 43 points (Albania being the only country that gave the maximum 12 points), winning the 20 th place among the 24 participants. In June of that year escradio.com granted the award for best song and best band on the festival of 2007 in a popular vote with 13.9% and 21.8% of the vote respectively. After Eurovision, the band began to develop his second studio album, taking the reins of his recording career. everything will change [/ album] was released on December 4, 2007, its first single a song called Amanda, a Spanish adaptation of Jimmy Jansson Swedish theme, written by the composer himself I Love You Mi Vida. Everything will change reached about 35,000 copies sold. Tour D'promotional tour announced for several locations throughout Spain during the summer was a success. Read more on Last.fm. User-contributed text is available under the Creative Commons By-SA License; additional terms may apply.