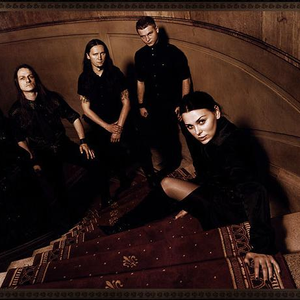 Darzamat is a Polish metal band, formed in Poland in 1995. Its source lies in symphonic black metal, however, with every new record the band has interlaced various elements creating a style which is described by media as dark metal, atmospheric metal or gothic metal. The distinctive feature is the successful combination of female and male vocal. Although there is a claim about Darzamat being a name of a Slavonic forest god, it comes from Latvian mythology denoting garden goddess (Lat. dārzs - garden, māte - mother). After releasing the two albums "In Flames of Black Art" (1996), "Oniriad"(2003) as well as MCD "In the Opium of Black Veil"(1999), in year 2003 the band underwent a massive lineup change. It was the time when Flauros (the founder and male vocalist) established the core of the band inviting Nera (female vocalist), two guitar players – Chris and Daamr and the keyboard player – Spectre. These are the people who started a new chapter in the history of the band, wrote the album “Semidevilish” (2004) and started to appear on different stages. Another album entitled “Transkarparia” (2005) was also a huge leap forward. What had a great impact on its success was undoubtedly the album's producer, namely Andy La Rocque, the guitar player of the cult King Diamond. Thanks to the work in the Swedish "Los Angered Recording", the album gained a surprising selectivity as well as the power of each and every instrument's sound. The positive reception of Darzamat's music resulted in multitudinous invitations to concerts. During a short time the band presented itself on various European festivals ("Rock Harz Open Air", "Wave Gothic Treffen", "Hard Rock Laager", "S-Hammer Festival", "Last Night on Earth", "Dong Open Air", "Moscow After Midnight”, "Metal Head Mission" and many more). Apart from the gigs in Poland, Darzamat performed on stages in Germany, Ukraine, Russia, Italy, France, Belgium, Holland, Estonia, Czech Republic and Slovakia. The band supported Sabaton in Benelux countries and Moonspel in its home country. At the beginning of 2007 the band performed on the German Winternachtstraum Festival and a months later in front of a six-thousand audience during the XXI edition of the cult festival Metalmania. Both the concerts were registered for the needs of the first official DVD album "Life Profanity (Visiting the Graves of Heretics)", which in the half of the year 2007 was released both in Europe and in the USA. In April 2009 Darzamat has inked the worldwide contract with German label Massacre Records. "Solfernus' Path" is the fifth album by the band, released on August 28, 2009. The album was also released in Japan due to co-operation with Spiritual Beast. The vinyl record appeared thanks to Witching Hour Production. "Solfernus' Path" is the first concept album in band’s history. The album was mixed at Black Lounge Studios in Avesta by Jonas Kjellgren (Scar Symmetry guitarist). Andy La Rocque played a guitar solo to the song "The King of the Burning Anthems". Roy "Maurice" Mayor, a member of the group Stone Sour created an intro for the album. There are three video clips promoting “Solfernus’ Path”: "Pain Collector", "Chimera" and "The King of the Burning Anthems." Promoting the album, Darzamat played a tour in Poland as well as in Mexico, France, Czech Republic, Ukraine and Belgium (Metal Female Voices Festival) and again in Poland on Castle Party Festival. In 2011 Darzamat’s musicians decided to focus on other music projects. The female vocalist of the band founded NeraNature and released its debut album “Foresting Wounds” the same year. On this album Nera presents quite gentler music, which can be qualified as atmospheric rock with elements of electronic music. In 2014 NeraNature recorded the second album entitled "Disorders" and in 2017, the band's third album will be released. Other part of the band reactivated black metal band Mastiphal, which came back on scene with a new album entitled “Parvzya”. It was released by Witching Hour Productions in 2011. [members]Darzamat line-up: Nera - vocal Flauros - vocal Chris - guitar Markus - bass Jacek Gut - drums [/members] Official site: www.darzamat.pl Official Facebook: www.facebook.com/DarzamatOfficial Read more on Last.fm. User-contributed text is available under the Creative Commons By-SA License; additional terms may apply.