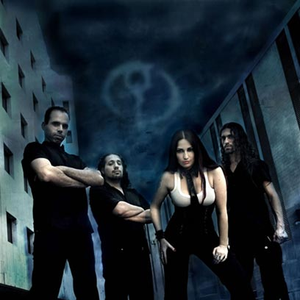 There are at least two bands called Distorted, in chronological order: 1) A melodic death metal/gothic metal band from Bat-Yam, Israel. The band formed in 1996 and released two demos until 2002 when they began concentrating more seriously on playing live. In 2003 and 2004 the band began to write the music for their debut album Memorial which was recorded in 2005 in Underground Studio in Sweden. The album was released on March 13th 2006 in Israel and May 2nd 2006 in the rest of Europe. In 2007, Distorted took part in the prestigious Metal Female Voice Festival, toured with Aborted and secured a deal with UK based record label Candlelight. Their second album, Voices From Within, was released in April of 2008, featuring guest vocals by Thomas Vikstrom (from Therion), Sven De Caluwe (from Aborted) and Lisa Johansson (from Draconian). Guitarist Henrik "Heinz" Jacobsen from Koldborn also made an appearance on the album. The band cite their influences as Opeth, Nevermore, Dark Tranquility and The Gathering, though there is a heavy Middle-Eastern influence to their sound, similar to countrymates Orphaned Land. Band members: Raffel Mor – vocals, Guitars Ben Zohar – Guitars Guy Shalom – Bass Amir Segev – drums Former members: Miri Milman - vocals Michal Akrabi - vocals 2) A Belgian metal band. The sound of the band is a melting pot of the musical preferences and roots of its members ; from Bay Area trash (Exodus, Testament and Machine Head), to heavy metal (Motorhead) and hardcore (Pro Pain and Hatebreed), with sometimes a little death metal (Entombed). Anything goes, as long as it sounds well and heavy. In october 2003 Peter Gaelens (ex-Cowboys&Aliens), Olivier Claeys (ex-Gallow and ex-Zero Tolerance) and Hans Vancouillie (ex-Gallow and ex-Zero Tolerance) join forces and start a new band called Distorted. One month later Jürgen Elias joins the band. In march ’04 they record a mini-cd (6 tracks) “Devil to pay” at the HYPE studios in Mechelen with producer Dee J (La Muerte). The cd is released in may on the WATT’S’ON record label. In 2004 and 2005 Distorted played a whole bunch of gigs with a whole bunch of bands, such as Do or die, After All, In-Quest, Peter Pan Speedrock, Oceans Of Sadness, Morda... and finally were invited to support Pro Pain for a part of their European "Prophets of doom" tour in november '05. In december the band feels that a second guitar would add to the power and groove of the music, and certainly would broaden the possibilities. “In order to grow you should evolve...” At that time Niek Devos (ex-Mindstab) joined the band. In April ’06 distorted recorded their new full album “Demon inside” , again at the Hype Studio in Mechelen with producer Dee J. In july it was mastered by Tue Madsen at the Antfarm Studio in Danmark. In September the band got signed by Precious Metal Productions which is bringing out the album in all over Europe... Read more on Last.fm. User-contributed text is available under the Creative Commons By-SA License; additional terms may apply.