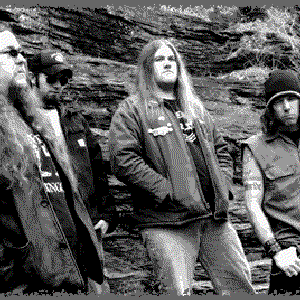 Earthride are another incredible band from the Doom Capitol/ Maryland, the fertile breeding ground that has spawned: Pentagram, Internal Void, Wretched, Iron Man, Unorthodox, and of course Spirit Caravan. In fact, there's connections to some of these bands, drummer Eric Little was in Internal Void, and singer Dave Sherman was in Wretched and also played bass in Spirit Caravan (along with sharing vocal duties with guitar god, Wino). The bands first offering was a self-produced, self-titled 4song EP/CD on their own label: Earth Brain records (2000). This recording coupled with their relentless live shows quickly proved Earthride was more than just "Sherms' side project. The Earthride sound is a brutal combination of Sherms' whiskey burned, Lemmy-esque vokills trainwrecked into a punishing mountain of doom. One listen to the mammoth wall of guitar that Kyle (sonic titan) Van Steinburg blankets over the concrete rythym section and its obvious that Earthride holds their own. "Taming of the Demons" is the bands first official full-length recording and was recorded by acclaimed producer Chris Koslowski (Pentagram, Spirit Caravan, Internal Void, the Obsessed) in their hometown of Maryland. The band adopted phrase: "PURE MARYLAND DOOM FOR THE BROTHERHOOD OF MUSIC", sufficiently sums up that the strength of this band lies in their unified dedication to produce hard, no frills heavy music! Southern Lord will bring out "Taming of the Demons in June 2002!!!So loud, So alive. All heavy, the Earthride!!! Within the first couple months of 2005 the band started recording their second album (“Vampire Circus”) with underground legend Mike Dean (Corrosion of Conformity, Probot) at the controls. They could NOT have picked a better set of hands, and ears to assist them with their second child! Deans’ inherent sense of aggression and mammoth tones provides the perfect touch of darkness the band needed to make this album a cohesive bulldozer from start to finish! His production on this album contains some of the same characteristics on his work with Corrosion on their: “In The Arms of God” album. Vampire Circus features 10 brand new obssesively heavy tracks. “Dirtnap” and “Swampwitch” feature Clutch keyboardist: Mick Schauer. Jean Paul from Clutch also assisted with the recording and engineering of this album. 2005 and beyond will find Earthride taking it to the streets at clubs, bars and dives all around the USA etc.. Read more on Last.fm. User-contributed text is available under the Creative Commons By-SA License; additional terms may apply.