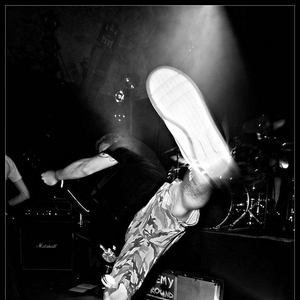 Enemy Ground formed in the Netherlands anno 2001 and is no spin off, no fusion, no comprise, just intense gut grinding hate. Massive flowing chords, pounding rhythms, all building up to some furious off beat breaks that have caused injuries all over Europe by now. Numerous shows have been played, a demo has been released, and a steady line up has been achieved. Live the band feeds of the energy of the people trying to pull them along into their expressions of anger. Insufficient Evidence is the name of the new mini EGC recently gave birth to, a blistering record that will cause dance floor mayhem on- and off-stage for without a doubt! Whilst promoting the new record the future goal for Enemy Ground is as clear as it ever was: pushing the bill, moving boundaries in mosh music and keep on showing to the scene what the difference is between hard and HARD. Line up: Pjotr - Throat Joris - Guitar/Backing Throat Marijn - Guitar Guido - Bass Peer - Drums Read more on Last.fm. User-contributed text is available under the Creative Commons By-SA License; additional terms may apply.