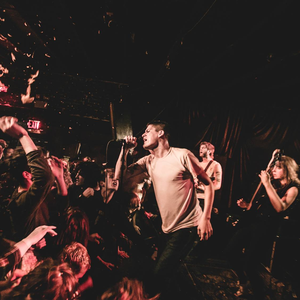 Taking cues from the psychedelic noise of the 1960’s, the art-damaged post-punk of the late 1970’s, and the aggression and immediacy of early 1980’s US Hardcore, Ex-Cult has curated a sound that audiences nationwide find accessible, yet not quite like anything else they’ve heard. Conceived at the legendary Memphis dive, the Lamplighter, by longtime friends Michael Peery (drums) and Chris Shaw (vocals), the band played their first show three months after the first practice, immediately gaining a local fan base and grabbing the attention of the Memphis punk institution known as Goner Records. After going through a name change (from Sex Cult to Ex-Cult) and releasing a couple of now impossible to find singles, Ex-Cult headed to San Francisco to record with producer and fan Ty Segall. The result is a post-punk juggernaut, oozing with flying saucer fuzz guitar, a pummeling rhythm section, and snarling vocals. Their follow-up, 'Midnight Passenger' was released in April 2014 on Goner. Read more on Last.fm. User-contributed text is available under the Creative Commons By-SA License; additional terms may apply.