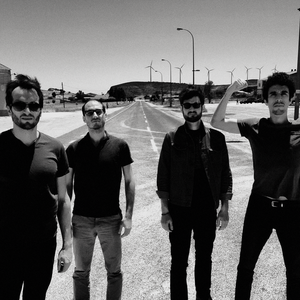 Together: such are the four Parisians from the band Exsonvaldes since they met at university nearly ten years ago. Grabbing their guitars, always looking for the right hue, a teenage spent listening to Nirvana, the shock with Radiohead, the frenzy of composing songs and sending them right to the heart of the battle. After two Eps where the idea of a repertoire and a personal style started to emerge, a genuine first album was eventually released in 2004, both a sum and a manifesto of everything they could and intended to create. Far from the attempts of categorizing a French rock scene, their singing in English plus their claimed influences ranging from the American indy of Death cab for cutie to the constantly boiling energy of the Belgian scene, gave them rapid access to the European scene. Then came a series of concerts, openings for Girls in Hawaii, noticeable gigs in Switzerland or in Praga, successive sets in Bourges and more than a hundred concerts all around France and this only for their first album's tour: Time we spent together. Thanks to the numerous stage-experiences, the band blossomed and got closer and closer; meanwhile the audience grew and the critics couldn't but stress this ability to strike and move: “Straight to the heart” (Nova); “An impressive musical maturity” (Rocksound); “Absorbing” (Les Inrockuptibles). With each concert, Exsonvaldes overcame their doubts and kept this notion of togetherness, which is the best you can expect from the road. 2009: the new album After the tour, back to new songs. A new album to imagine. Everything stems from one single title: Lali. The audacity of new experiments, the addition of new elements to the tension of guitars, the impact and richness of the melodies, are more than ever the band's trademark. A soft electro touch, rhythmic programming, the help of a female voice to create instant emotion and walk toward light. From this song, the album will patiently be built, enlightened by the meeting with Alex Firla (Phoenix, Arthur H). « Without Alex » says Simon »we would have needed 3 or 4 albums to reach such a level, to forget our writing habits ». And that's how and why the songs become both more accessible and powerful. Ardour, breaks, pitching are only there to push the song forward, to make blood even more red. The ideal attack of guitars grips you while the voice reaches fragile yet controlled heights, the various melodic lines become the branches of a common river. Alex Firla leads the group towards new horizons, new melancholies. For example in the song 84 we happen to meet Japan and Bauhaus, as well as Daniel Ash's side project Tones on tail; a rustling forest of guitars over which the voice can set itself free; this song deals with course, introspection and liberation, density and grace. Near the edge of something beautiful: Recorded in Paris, mixed by Alex Firla and mastered by Mike Marsh (Depeche Mode, Klaxons). A year and a half of hard work for the 11 songs of the album, to give melancholy and anger a vital breath. Time becomes the time of the lyrics; it can be untied love stories or taking into account the ambitions and failures of life. Anguish, the wistful veil of the lyrics show the evolution of a self-assertive group. « We've come to a point in our lives, Simon says, where the four of us have chosen music; and of course it's a choice that's difficult to explain to the people around us. With music, to be clearly understood, we have to assert and claim our choice more strongly and loudly than in any other activity. Every day, every minute, we take a risk, but the risk to reach something more beautiful. I think the lyrics of this album convey an anguish which is not the anguish of uncertainty but that of risk. » Times are changing, fortunately. For the four Parisians of Exsonvaldes it's no more a question of cutting a path but of truly existing on a scene where singing in English is not an obstacle anymore. Whatever, the voice is too enthralling, the sound too offensive, the attitude too determined to be stopped by any obstacle. The problem is not either to confront the masters but to be who you are, to free yourself in eleven songs. Near the edge of something beautiful is a rich, subtle album which manages to defeat the dangerous game of the passing of time since everything is carefully mastered and controlled. Such is the humble and unashamed rock, the boundless rock of four guys who when they don't tour live in Paris. We are facing eleven inspired and powerful songs - each managing to get its own touch - and the patient and permanent challenge of reaching together personal heights. Jérôme Attal. Read more on Last.fm. User-contributed text is available under the Creative Commons By-SA License; additional terms may apply.