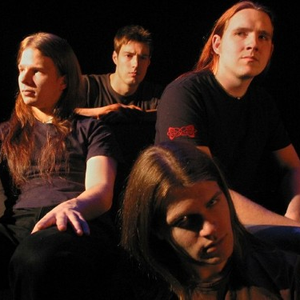 Farmakon was a four-piece Progressive Death Metal band from Finland. The band formed in April 2001, in the city of Tampere. The band combine funk and jazz elements into their music. The band released its first demo in 2001, which caught the attention of Lee Barrett and the band was quickly signed onto Elitist Records, a branch of the infamous Earache. The bands debut album A Warm Glimpse was released in the year 2003. It turned out to be a success, especially among the progressive metal circles, and Farmakon was widely noted by the metal press as a band to keep an eye out for. Farmakon was signed onto by the Finnish FS Records after Elitist Records came crashing down. The band's second album Robin was released in early 2007. The album continues with the band's trademark twist, but also introduces a darker and more focused side of Farmakon. In 2010 they split-up. Band line-up (as of october 2007): Marko Eskola - Vocals Toni Salminen - Guitars Pekka Kauppila - Bass Riku Airisto - Drums Read more on Last.fm. User-contributed text is available under the Creative Commons By-SA License; additional terms may apply.