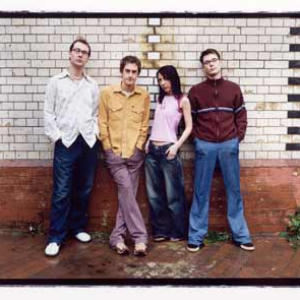 Farrah are a UK power pop quartet formed in the north east of England in 1999. After releasing their debut single "Terry" on the indie Noisebox label in the UK they were signed to The Police manager Miles Copland's Ark 21 label for the release of their debut album Moustache. The album was released in the UK, USA, Europe and Japan and saw the band tour the world extensively to support it. After Ark 21 dissolved, in 2004, their second album Me Too was released on various independent labels throughout the world. Whilst developing a harder rock sound Me Too incorporated more diverse elements into their sound whilst still essentially remaining true to the lyrically quirky 3-minute harmony-laden melody-driven power pop format the band became known for. In 2007 Farrah released their 3rd full length album Cut Out and Keep on Rock Indiana (Spain), Egging/1977 (Japan) and Lojinx (UK & ROW). In 2007 Dana Myzer, formerly of Cotton Mather, joined the band on drums making the current line up Jez Ashurst (vocals, guitar), Andrew Campbell (keyboards, guitar, vocals), Michelle Margherita (bass, vocals) and Dana Myzer (drums, vocals). Although Farrah have built up a solid fan base over the years they have never crossed into the mainstream consciousness and remain largely unknown outside indie / power pop circles. The band are often cited alongside bands such as Fountains Of Wayne and Weezer as keepers of the contemporary power pop flame. www.farrah.co.uk www.myspace.com/farrah Read more on Last.fm. User-contributed text is available under the Creative Commons By-SA License; additional terms may apply.