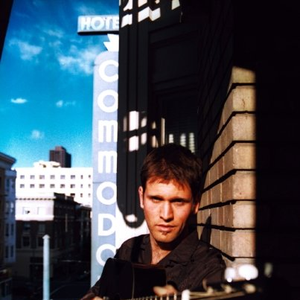 San Francisco Bay Area troubadour and award winning songwriter, Forest Sun has regaled audiences around the globe with his wealth of songs and stories, all sung and told with back porch ease and bonhomie. Sun's music has been compared to everyone from Jack Johnson and John Mayer to Van Morrison and Bob Dylan but his unique style is entirely his own. He's opened for Bonnie Raitt, The Beach Boys, Steve Earle, Lyle Lovett, Jackson Browne, Keb Mo and Brett Dennen among others and collaborations on his many records include the likes of such musical luminaries as Jolie Holland, Sean Hayes, ALO, Hot Buttered Rum to name a few. In 2007 Forest was awarded 1st place in the Pacific Song Writing Competition with Drops in the Ocean, and in 2009 his song Gurus and Rockstars from the album Harlequin Goodnight was nominated for best song in the Just Plain Folks Awards. His music provided soundtracks for Land of Saints, A Common Thread, and 5th Symphony Document. Forest Sun has been featured on KFOG Local Scene Vol. 1 and 3 and the Japanese compilations Surf Time vol. 1 and 2. As well as producing his own 7 records, (Not Afraid, Plenty, For the Story, Walk through Walls, So Nice, Harlequin Goodnight and the 2010 release of the children's record, Just for Fun) Forest Sun has produced Minneapolis song-writer Alex Goldfarb, the benefit CDs Songs for Laura Vol 1 and 2 and hosted the monthly Songbird Series at the Bazaar Cafe and Songbird Radio on KWMR. Acoustically, he tours with Ingrid Serban singing harmonies and the full band includes David Phillips on lap steel, Steve Adams from ALO on bass and Michael Messer on drums. It's one of those album closers that's enough to make you play the whole thing through again. 'Harlequin Goodnight' is altogether a quiet joy in a raucous world. John Davy - No Depression "Forest Sun is now my favorite new singer-songwriter... his songs are jaunty, timeless and spirit raising, even life-affirming." Mac McDonald, Monterey Herarld “... alt country, folk-rock jams, creating a hodgepodge of comparisons that ranged from Jack Johnson to Ryan Adams to David Gray. ...even into Bob Dylan territory ... a daunting place to tread, but pulled off with the grace of a musical veteran” Jessica Small, Santa Barbara Independent "... a toe tapping adventure" Matt Kramer, Pacific Sun "Music for for bright sunny days and warm nights. For getting it on and having a ball, for dancing naked in your kitchen." CD Baby Read more on Last.fm. User-contributed text is available under the Creative Commons By-SA License; additional terms may apply.