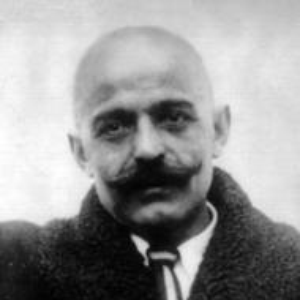 George Ivanovich Gurdjieff (Armenian: Գեորգի Իվանովիչ Գյուրջիև, (Georgian: გიორგი გურჯიევი, Greek: Γεώργιος Γεωργιάδης, Russian: Гео́ргий Ива́нович Гюрджи́ев, January 14, 1866 – October 29, 1949) was considered a mystic and a spiritual teacher. He called his discipline "The Work"(connoting "work on oneself". He claimed that the teachings he brought to the West from his own experiences and early travels around East expressed the truth found in other ancient religions and teachings relating to self-awareness in one's daily life and humanity's place in the universe. It might be summed up by the title of his book: Life is Real Only Then, When 'I Am'. Gurdjieff claimed that people cannot perceive reality in their current states because they do not possess consciousness but rather live in a state of a hypnotic "waking sleep". "Man lives his life in sleep, and in sleep he dies."[18] As a result of this condition, each person perceives things from a completely subjective perspective. Gurdjieff stated that maleficent events such as wars and so on could not possibly take place if people were more awake. He asserted that people in their typical state function as unconscious automatons, but that one can "wake up" and become a different sort of human being altogether. Music The Gurdjieff music divides into three distinct periods. The first period is the early music, including music from the ballet Struggle of the Magicians and music for early Movements, dating to the years around 1918. The second period music, for which Gurdjieff arguably became best known, written in collaboration with Russian composer Thomas de Hartmann, is described as the Gurdjieff-de Hartmann music.[31] Dating to the mid 1920s, it offers a rich repertory with roots in Caucasian and Central Asian folk and religious music, Russian Orthodox liturgical music, and other sources. This music was often first heard in the salon at the Prieure, where much was composed. Since the publication of four volumes of this piano repertory by Schott, recently completed, there has been a wealth of new recordings, including orchestral versions of music prepared by Gurdjieff and de Hartmann for the Movements demonstrations of 1923-24. Solo piano versions of these works have been recorded by Cecil Lytle[32] and Keith Jarrett.[33] The last musical period is the improvised harmonium music which often followed the dinners Gurdjieff held in his Paris apartment during the Occupation and immediate post-war years, to his death in 1949. A virtually encyclopedic collection of surviving recordings was recently released. A detailed booklet includes thoughts from producer Gert-Jan Blom and a preface by Robert Fripp.[34] In all, Gurdjieff in collaboration with de Hartmann composed some 200 pieces.[35] And most recently in May 2010, 38 minutes of unreleased solo piano music on acetate was purchased by Neil Kempfer Stocker from the estate of his late step-daughter Dushka Howarth. Read more on Last.fm. User-contributed text is available under the Creative Commons By-SA License; additional terms may apply.