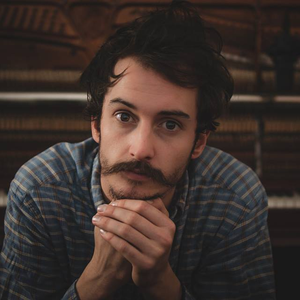 Graham Candy (born 1 April 1991 in Auckland, NZ), is a singer-songwriter and actor from New Zealand. In 2013 he moved to Berlin to begin his music career. Candy’s first collaboration with German DJ and producer Alle Farben, "She Moves" (2014), gained him quick popularity with his quirky, high range vocals, as well as his first gold-record single. He is currently signed with BMG Rights Management and the berlin-based label Crazy Planet Records. In 2013, Candy also made his feature film debut with a lead role in Queen of Carthage (released Fall, 2014), alongside Keisha Castle-Hughes and Shiloh Fernandez. Early life Born and raised in Auckland, Candy is the youngest of four children. His artistic career was established at a young age through a combination of music, dance and acting. Candy started Ballroom and Latin dancing at the age of 6 and with his dance partner, went on to gain titles as juvenile, junior and youth champion in both New Zealand and Australia. At age 12, Candy was introduced to the film industry as the photo double for the character "Edmund" in The Chronicles of Narnia – The Lion The Witch and The Wardrobe. Candy attended Rangitoto College where his love of the arts was cultivated. He was part of the school's winning team at the National Stage Challenge competition, a member of the National Champions barbershop choir, and winner of AMI Showdowns "best supporting actor" for his role in the high school production "Seussical". At aged 17, Candy went on a school exchange to Saint Ann's School, NY) to further develop his creative talents. In 2008, Candy gave songwriting a go, and entered the Play It Strange songwriting competition for secondary school students. His song "Lasts Forever" was awarded 7th place. Mike Chunn – the founder of Play it Strange has helped direct Candy's music career ever since. 2009–2012 In 2009, Candy stopped dancing to study acting, but at the end of the year he left to pursue music with band "The Lost Boys". In the 2009 New Zealand Battle of the Bands, they reached the top ten with their song "Hot Air Balloon". After accepting a role in the short film "Go the Dogs", directed by Jackie Van Beek, Candy returned to film and the stage gaining two NAPTA "best supporting actor" awards for his roles in the stage production of "Footloose" and "Spring Awakening". Shortly after, Shiloh Fernandez (Evil Dead, Red Riding Hood) was introduced to Candy and he was signed for his first lead role in a feature film as Candy in Queen of Carthage, directed by Mardana Mayginnes. Candy commenced his solo music career in 2012 by playing in Auckland's bars and pubs. He helped establish live music venue, The Portland Public House as the in house musician and event manager. Candy immersed himself in the local music community and was given this opportunity to play for audiences that included the likes of Everclear and the Black Keys, and play with musicians including Mumford and Sons and Daniel Bedingfield. In January 2013, Rachael Watson (Spin 33 Records) introduced Candy to Matthias Müller of Crazy Planet Records (Germany), which led to the beginnings of a commercial solo career in Germany. 2013–2014 Since relocating to Berlin, Candy has collaborated with German indie-pop band Abby, DJ Alle Farben and electro-swing king Parov Stelar. His melodies have already received rave reviews with the release of his first single "13 Lords", and his feature vocals on Parov Stelar's "The Sun". His first major success came with Alle Farben's debut album "Synthesia", with feature vocals on two tracks, "She Moves" and "Sometimes". "She Moves" swiftly gained a spot in the top ten singles in Germany and charted in many other countries including Austria, Switzerland, Netherlands and Belgium. The single has also been remixed by the likes of Bakermat and Goldfish. Candy is currently working on his debut EP for release later in 2014. Read more on Last.fm. User-contributed text is available under the Creative Commons By-SA License; additional terms may apply.