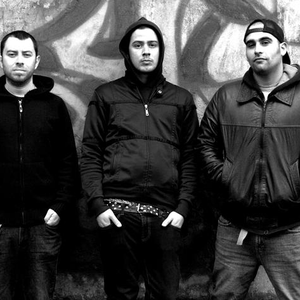 Tim Picchetti and Emanuel Finlayson ("Chiwawa") had been friends since they were 4 years old, but they lost contact when their families moved to different foreign countries. Some years later, they met in Chile, and to the surprise of both of them, they were both musicians. Tim plays the guitar and Finlayson, the drums. Logically, they formed a band. After some years playing covers of groups like Green Day and Nirvana, Tim and Chiwawa decided to create their own sound. A little later, TIm met Koko Stambuk, who thye invited to join the band. Chiwawa accompanied them. it is here, with Koko playing bass for a parallel project, that they formed GUFI y began their demo CD, a demo that would take thpem from their small home studio to the offices of Sony Music Mexico, with whom they made a contract to record the CD. Gustavo Labrin, who originally was going to replace Koko on bass, joined the band, playing second guitar instead, with Tim (vocals and guitar) and Chiwawa (drums) to record "Historias de la Calle" (Tales from the Street). A little later, Jogn Guetealba joined with his bass, filling the void, and so, completing the band. After finishing the CD, "couple days" for the trip to Mexico turned into a long and discouraging wait for the band. After some months of "waiting", Tim traveled to Atlanta to visit his family, but that week, when it seemed things couldn't get any worse, a worse tragedy than anyone could have thought of hapened - Chiwawa was brutally murdered. For some months, Gustavo decided to abandon the group and Tim and Jorge got together in Spain with Ozzy, a drummer who even though things didn't work out, sirved to reenergize Tim and Jorge with playing in a band and following the dream of music. Tim traveled to Mexico in order to finalize the contract between GUFI and Sony, while Jorge and the new drummer, Dario, began preparations for the release, finally, of their debut CD, "HISTORIAS DE LA CALLE". Translated from the official GUFI site. Read more on Last.fm. User-contributed text is available under the Creative Commons By-SA License; additional terms may apply.