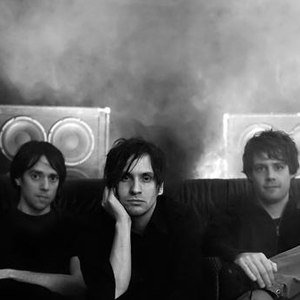 Helen Stellar Launch Skyward With If The Stars Could Speak, They Would Have Your Voice… While that’s quite a lofty title, it’s also an apt description of the sonic direction in which Helen Stellar are headed. Having already proven themselves virtuosos of spiraling, explosive and ethereal dream-rock, the LA-based trio have given their huge sound a sense of urgency on their first official full-length release. In doing so, vocalist/guitarist Jim Evens, drummer Clif Clehouse, and bassist Dustin Robles expanded from trio to quartet with the addition of second guitarist Eli Lhymn, amping up the energy of Helen Stellar’s carefully crafted and densely-layered sound. With melodies and textures that soar high into the ether, unrelenting drumbeats that thunder from earth below, driving bass lines, and Evens’ lyrical obsession with the battered heart of the human condition, Helen Stellar have successfully exchanged beautifully dripping rock ambience for a head-on swirling sonic attack of bittersweet melodies. Clehouses’ deft bombastic percussion propels the hooks and melodic twists of “Joseph” and “From Here On” at a breakneck pace while Evens sings passionately about overcoming emotional blindness through the thick, gritty pulse of “Hyper-aware.” “The Disappearing Twin” careens out of control like a psychedelic freight train without brakes as the gorgeous heavenly noise freak-outs wrap around sky-bound “Hopeless Romantic” like a warm blanket. As the third unsigned band ever invited to play on KCRW’s highly influential Morning Becomes Eclectic, Helen Stellar have contributed to the soundtracks of Cameron Crowe’s Elizabethtown, the Luke Wilson film Henry Poole Is Here, and the latest Jennifer Anniston/Aaron Eckhart movie, Love Happens. Additionally, they have licensed tracks to the critically lauded TV series’, Friday Night Lights and the L Word. 2010 finds the band continuing to forge their relationship with the film industry by contributing tracks to, and appearing and performing in, the latest Gregg Araki film, Kaboom. While legendary rock critic/director, Cameron Crowe, has released Helen Stellar’s past material, the band is currently shopping If The Stars Could Speak, They Would Have Your Voice… to labels with international distribution. With the right representation, Helen Stellar plan to conquer the world in 2010 with a sophisticated yet highly accessible album, a gargantuan live show, and enough determination to light the darkest corners of the galaxy. Thanks for listening and enjoy – loudly! - Markus Kagler, Under the Radar Magazine Read more on Last.fm. User-contributed text is available under the Creative Commons By-SA License; additional terms may apply.