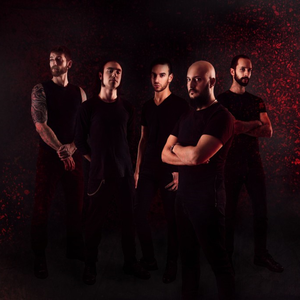 HIDEOUS DIVINITY's music starts taking form in January 2007 between Oslo (Enrico, former founding member of HOUR OF PENANCE now living in Norway) and Rome (Synder & Mauro, both members and ex-members of... way too many bands to mention). The aim is to come out with some real, straight-in-your-face unholy death metal: in other words, the only music in the world that deserves to be played. The two songs featuring the "Sinful Star Necrolatry" were written and arranged by Enrico during 2007 and finally recorded by Enrico, Synder and Mauro in September, 2007 at the 16th Cellar Studios by the sound-engineer and long-time friend Stefano "Saul" Morabito (who also took care of the mixing). With this material ready to be spread around the world via MySpace, HIDEOUS DIVINITY starts his search for a stable line-up in Norway, and hopefully for a label interested in releasing their first full-length CD: the new material is already coming out, and the recording sessions of the first HIDEOUS DIVINITY album are expected for summer 2008. All the obscure, mystical lyrics of "Sinful Star Necrolatry" remain copyright of Synder. Music... is self-explanatory. Read more on Last.fm. User-contributed text is available under the Creative Commons By-SA License; additional terms may apply.