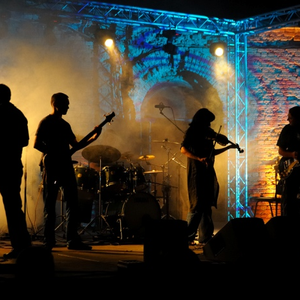 A Polish progressive rock band founded in 2004. 'Indukti is an induction of five minds, a musical conglomeration designed to stimulate the imagination and draw forth exceptional experiences and unique emotions.' - Violinist Ewa Jablonska. Ewa is joined by Piotr Kocimski on guitar and sax, Maciej Jaskiewicz on guitar, Wawrzyniec Dramowicz on drums and Andrzej Kaczynski on bass. In September 2004 Indukti, from Warsaw, Poland, released S.U.S.A.R., the debut album under the Off Music label. While recording, the main intention of the band was to maintain as much of the concert spontaneity and energy as possible. Indukti invited Mariusz Duda from Riverside to lend his enchanting voice and Anna Faber to enrich the album with her harp skills. S.U.S.A.R. was re-released worldwide on 6 September, 2005 by Laser's Edge. After the album's release the band often performed concerts, was awarded the first prize in three festivals and appeared on two compilations and on the independent release which received a warm welcome by fans. On 2 January, 2008 Indukti announced on their official site that they would start recording a new album. On 4 June of that year, the band disclosed that new music was recorded and that they would begin mixing the second album. Finally, on 29 May, 2009 Indukti announced their new album entitled Idmen, to be released 27 July, 2009 in Europe and 11 August, 2009 in North America by record label InsideOut Music. The group invited three guest vocalists to sing on Idmen, namely Nils Frykdahl (Sleepytime Gorilla Museum), Maciej Taff (Rootwater) and Michael Luginbuehl (Prisma), leaving the instrumental character of the band’s core unaltered. The band prefers to invite guest musicians who suit a particular track. Each time, the guest is put into something finished. Working with vocalists this way enables the group to play a song live, says Jablonska. Along with the guest vocalists, musicians Marta Maślanka on cimbalom (hammer dulcimer) and Robert Majewski on trumpet provided their talents for the new album. Justyn Parfianowicz is credited for the cover artwork design. Indukti combines progressive rock, heavy metal, classical and world music, ethnic sounds from other cultures and even pop and avant-garde references. Guest musicians: S.U.S.A.R. (2004): Mariusz Duda – vocals Anna Faber – harp Idmen (2009): Nils Frykdahl – vocals Maciej Taff – vocals Michael Luginbuehl – vocals Marta Maślanka – cimbalom Robert Majewski – trumpet Read more on Last.fm. User-contributed text is available under the Creative Commons By-SA License; additional terms may apply.