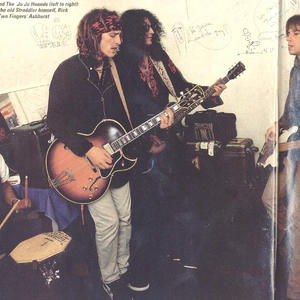 In 1991 Izzy Stradlin quit Guns N' Roses due to his aversion to touring and the heavy drug and alcohol abuse by some members. He left the band in the middle of their Use Your Illusion Tour and decided to record a solo album. Izzy invited some friends to help him recording and this bunch of musicians would become Izzy Stradlin and the Ju Ju Hounds. They released their album in 1992. "Izzy Stradlin and the Ju Ju Hounds Live" was recorded at The Tivoli Theatre in Dublin, Ireland (12.18.1992). This five-song EP was released in Japan only. Read more on Last.fm. User-contributed text is available under the Creative Commons By-SA License; additional terms may apply.