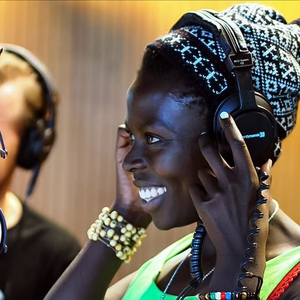 For the fourth time now Jaqee introduces herself to the World with her impressive voice and her unique attitude. Born in Kampala, the Capital of Uganda, she began her vagabond like life the moment she was born. During her childhood, she travelled the rural areas of her home country with her parents. This is where she collected her first impressions of the life as a nomad. From birth on, wandering the earth became a part of her destiny. In the early nineties she undertook a huge step and immigrated to Sweden. The City of Gothenburg would become her adopted home from where she was able to access all the different destinies and directions, which were on offer to her. Through all the borders Jaqee crossed, music has always been her steady companion whereas it never was a stereotype thing that let her get down with any special genre, than more like a special feeling. “To do what I want in a particular moment is my motivation. I like to express myself in all kind of sounds.” So above all, she became a true nomad in the world of music. After Several successful co-operations with numerous artists, in 2005 Jaqee made an impact with her debut album “Blaqalixious”, which was mainly a Soul and R&B album. “That was my direct contact to the music that a rural community in the Diaspora plays” she explains. But it did not end up there because a nomad like Jaqee does not settle anywhere. After further creative and fruitful collaborations, Jaqee released her second long player “Nouvelle d´ amour” in 2007. This time, the sound was more of a rocking, bluesy vibe. It seemed to be the total opposite to her debut album but for Jaqee it was only the next step on her path in the circle of life. “Everything is possible as long as it is real. I never wonder about things like genre as long as the vibe fits.” One step further on, she encountered the songs of Billie Holiday, which lead to the album “A letter to Billie” recorded together with Bohuslänbigband, a lovely homage to the great American Jazz Singer. Both of her first two albums each received a Swedish Grammy nomination and several appearances in the Swedish national television increased her standing as a passionate and soulful Singer. So Teka, producer and creator of many successful riddims for his co-found German label, Rootdown Records considered her to be part of his new project “Koala Desperados“, which link Caribbean vibes like Cumbia to Reggae, and while working on it a totally new idea was born. Jaqee and Teka decided to combine both their talents into one album. The results of which you can now hear on “Kokoo Girl” a refreshing mix of Old School Reggae sounds from the seventies combined with up-to-date Beats, electronic twists and turns and of course the amazing voice of Jaqee. For her, this means that she has achieved some of her ambitions. “I grew up with African Gospel, in sad and turbulent environment, so for me, this means I grasp and totally understand the reggae and its non ending struggle for the common man.” No sooner said than done and “Kokoo Girl” will become Jaqee’s fourth and newest release. All the paths she followed, countries she crossed and influences she absorbed are a part of this album. She sings with the freedom of spirit of the travelling people. The word “Kokoo” is the only memory that remains everlasting. It is just a word but its impact is so huge that Jaqee does not really like to explain it. “It implies irony and seriousness as well as sarcasm and fun.” It is more than a gimmick. “Kokoo” is a very special feeling and a clear view of the world from an artist who has seen more of it than all the people that have settled down. Read more on Last.fm. User-contributed text is available under the Creative Commons By-SA License; additional terms may apply.