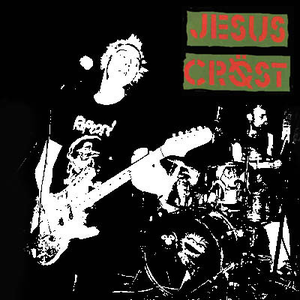 Jesus Cröst started as a project around 1997. At that time both members, 13 and 10, participated in other bands. This kept Jesus Cröst very low-profile. In 1997 they recorded their first demo ‘Punk is Dead’. This tape is still considered to be a pretty good release, although the recordings are quite rough and primary (due to the fact that they were actually a test). During these recordings Jesus Cröst was temporary joined by guest vocalist Mandy. Her guest-membership would actually continue to last for a few years. In 1998 the band decided to take things more seriously, although it would remain a project for much more years. Maybe the disgust of the members for the state of the ‘punk-scene’ contributed to the fact that they did not want to dedicate their full time to the band. The second demo ‘Punk is Fashion’ was not properly released, because the recordings turned out to be very disappointing. In 1999 JC collaborated with Belgian label Filth Ear to release a full length CD. All copies of ‘The Feeding of the Party Pönks’ sold out and they started to do more gigs. By that time the name had transformed into Jesus Cröst. After a lot of troubles and some more negative experiences regarding the local scene, JC decided to focus on releasing records and to stop doing gigs. In 2000 Dutch label Black Star offered them to do a split EP with Brasilian heroes Masher. It was never released though, because 13 and 10 got screwed. A lot of things did not happen at that time and the band got kicked out of two rehearsal rooms in Rotterdam. Mandy had already left the duo and JC was back where they once started. Their only friend left in the business, Tim from Filth Ear, reanimated the band with a great offer. A split EP with Active Minds -one of JC’s favorites- was released. The vinyl was colored green and orange, being a tribute to HC-legends Heresy. Two years JC had awaited this masterpiece, which they titled ‘Black Star is Dead, Long Live Filth Ear’ and was all about the theme of rip-offs in the underground. The release was a co-production with Richard UPS and it featured three very melodic songs from the band. Later in 2002 another EP was released in co-operation with Terrötten Records from Brasil. This EP with Gritos de Alerta put 13 and 10 back on the grind/crust-map. As a result of the releases, they started to do some gigs again, although they were never really motivated to tour. In 2003 JC went back into the studio for the first recordings for an upcoming LP. Because this would take them a long time, Filth Ear released a second CD covering the first 8 years of Jesus Cröst. This CD -‘Eight Years of Errors’- featured all the releases on vinyl, but also some bonus tracks and an entire gig. This gave the duo some more time to record the second part of their album, that would again be released on Filth Ear. At this point the ‘music’ of JC had nothing more to do with crust, but had evolved into something like grind/powerviolence. Lyrically the band was done with their criticism on the scene and punks in general, so they started to write less ‘political’ songs. Being encouraged by the positive reactions on their EPs and the progression towards their first full LP, 13 and 10 started to intensify their actions. Finally Jesus Cröst did some short tours, they appeared live on underground radio and a website was built. The gigs and their website resulted in some new friendships within the Dutch scene and Jesus Cröst boosted with energy. What never changed was the unpredictable character of the band: they did a full tour incognito, their gigs could be very short (10 minutes) and their music could change from month to month. Most of the time they did not speak during gigs, but sometimes their old habit of preaching could appear. After the release of their album ‘Fehlentscheidung’ in 2005 the band did another mini-tour. They had already decided to focus on short tours and to quit doing single gigs. No longer did 13 and 10 want to offer their entire weekends for (literary) 15 minutes of fame. The LP was another boost in the existence of JC. Especially side B was more Powerviolence than ever, and again the quality of the recordings had improved. After the appearance of the website, Jesus Cröst also featured on MySpace. The emphasis of the band had shifted from the initial ‘infamous’ lyrics towards the ‘music’. A gig or recording from the band was no longer an outing of frustrated political criticism on the underground/punk-scene, but had become an effort of merciless inimitable ‘musical’ madness. Nowadays Jesus Cröst no longer tries to impress their audiences by verbal abuse, but by noise violence. Thus, actions speak louder than words… Read more on Last.fm. User-contributed text is available under the Creative Commons By-SA License; additional terms may apply.