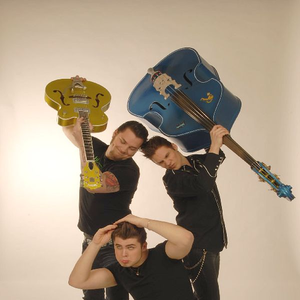 The fundament is there. It is energetic, primitive and raw: Rockabilly in its original form. Derived from the music of icons such as Johnny Burnette, Carl Perkins, Charlie Feathers and of course Elvis’ earlier recordings. From playing absolute rockabilly in the beginning, John Lindberg Trio have incorporated modern influences along the way and created a tougher sound, without losing the rockabilly style. Combined with their tight and explosive live show, this made them one of Sweden’s most popular live acts. John Lindberg Trio musical journey started with 13 year old John on stage with his guitar. When Martin (double-bass) and Jocke (drums) joined later on, everything fell into place. In spite of their young age they are already widely experienced and have done more live gigs than most band do in a lifetime. The release of their debut album in 2006 was followed by a Christmas tour as supporting act for The Refreshments – and consistently became the band people talked about when the night was over. The two following albums were well received by their old fans and also generated lots of new. The band is now planning to release their fifth album in February 2011. John Lindberg Trio journey continues, with no ending in sight. Read more on Last.fm. User-contributed text is available under the Creative Commons By-SA License; additional terms may apply.