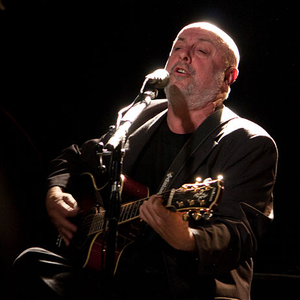 Juan Carlos Baglietto is an Argentine musician, singer and composer, born in the city of Rosario, Argentina in 1956. He formed part of several small groups, until the birth of the band "Irreal" in 1980, together with Juan Chianelli (piano), Jorge Lonch (bass), "Piraña" Fegundez (flute), Alberto Corradini (guitar) and Daniel Wirtz (drums). They had a good convocatory in their shows, but where prosecuted and censored during the Military Process . In mid 1981 Baglietto started as a soloist. He presented himself in Capital Federal, but he didn't achieve popularity until he turned out the revelation of the Festival of La Falda in 1982. By then he had created a support band with Silvina Garré as chorus, Fito Páez in the piano, Rubén Goldín in guitar, Sergio Sainz in bass and José "Zappo" Aguilera in drums. With this band he recorded "Tiempos dificiles", the first argentinean rock album to win the golden disc. Many of the tracks, such as "Mirta, de regreso" or "Era en abril", reached a big diffusion in the radios of Buenos Aires and this encouraged the success of the presentations of the material, in Obras, right in the middle of the War of Malvinas. This success stopped a little the sells of "Actuar para vivir, the next album. In may of 1983 "El Rosariazo", a concert in Obras of all the rosarian musicians took place. Baglietto presented himself together with Litto Nebbia, Silvina Garré and Fabián Gallardo. His band filled five times the Astral theater, presenting the disc "Baglietto". In november of 1984 the show "Por qué cantamos" took place, together with Celeste Carballo, Nito Mestre and Oveja Negra. "Modelo para armar" (1985) was the first disc without the participation of Fito Páez and in which Baglietto tried to change the style that characterized him. For that he recorded all new material, composed specially for this disc. "Acné" (1986) is a tribute to the music he grew up with, according to his words. So he chose to sing songs that hadn't been hits in their time, such as "Los días de Actemio" (from Los Gatos) or "Tema de Pototo" (by Almendra). In september of 1986, he presented himself in front of 100.000 persons in the Monument to the Flag in Rosario, Argentina, as part of the celebrations for One thousand days in Democracy, together with Fito Páez, Silvina Garré and Antonio Tarragó Ros. "Mami" (1988) was registered after a year and a half of silence, with the company of Sergio Sainz (bass), Eduardo Rogatti (guitar), Marco Pusineri (drums) and Rubén Goldín (chorus). From the second disc on, Baglietto and Garré had shared scenarious in a sporadic way. In the '90s they decided to put on a show together and record a live disc. «The encounter gives the possibility to show how different we can be. With the years we have gone apart in style, but that can be shared», they justified. Their next work, "Ayúdame a mirar" (1990), is totally acustic, with guitars and percussion, for which plenty of composers apported material: Adrián Abonizio, Rubén Goldín, Chico Buarque, Mezo Bigarrena and Joaquín Sabina, among others. Together with Lito Vitale they faced a musical project that had as a result "Postales de este lado del mundo", a disc that included songs from popular "criollo" authors, such as Carlos Gardel, Homero Manzi, the Expósito brothers, Mariano Mores and Enrique Santos Discépolo. "Luz quitapenas" (1996) was the reencounter with the musicians that accompanied him in his first times: Adrián Abonizio, Fito Páez, Jorge Fandermole and Rubén Goldín. "15 años" (1998) was recorded at live during some of the shows at the Opera theater. The album is a tour among the most important exits of the rosarian, with the participation of great figures such as León Gieco, Fito Páez, Ana Belén, Joaquín Sabina and Alejandro Lerner. In 2001 he retook the joint work with Lito Vitale, together with Lucho González as an invited musician. In 2006 after a few years without a band he edits "Sabe Quien", a disc that makes the most of the beauty of songs of great composers such as Abonizio, Fandermole, ect. Read more on Last.fm. User-contributed text is available under the Creative Commons By-SA License; additional terms may apply.