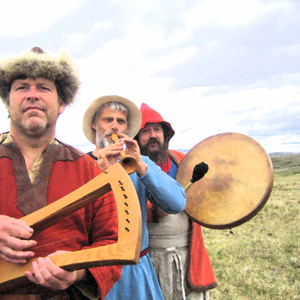 Authentic folk music from Denmark, land of the Vikings. Door of sound Since the release of their first album and continuing with the following two albums, Krauka (Gudjon Rudolf, Aksel Striim and Jens Villy Pedersen) have followed their own quite unique agenda. On their debut album Vikinga Seidur, they sought to faithfully recreate the tones and songs of the Viking era, using inspiration drawn in equal parts from compositional and instrumental archeology. On the follow-up album Stiklur they opened up for a more modern universe of sound by mixing both electric and electronic elements and including more of their own compositions. Their new album makes a surprising connection between past and present, blending a progressive modern musicality with thousand-year old tones in a tasteful dish which bears the title Bylur . Read more on Last.fm. User-contributed text is available under the Creative Commons By-SA License; additional terms may apply.