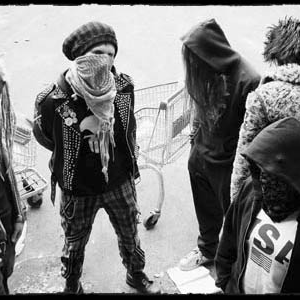 Lastkaj 14 was started in 2003 by Stryparn (voc, bass) and Dr Dille (drums). From the beginning, the band was only meant as a protest against the lack of trallpunk that reigned in Sweden at the time. It became so much more... LK 14 recorded and released a 5 track ep in 2004. The ep was well received from both fans and media. The fan base grew rapidly and the demand for shows and more records were huge. Then as the road to fame lay ahead of them, the band suddenly disappeared from the surface of earth in 2004. Without traces or notices, everyone believed that the story of LK14 was over. They were wrong... Suddenly in 2009 without any warning, the band resurfaced again. This time they were re-enforced by the new members Stukarn (guitar, voc) and Saffran (guitar, voc). They released the debut album "I brist på annat" in 2010 and started touring at the same time. Their old fans returned and through their shows LK 14 reached out to a whole new audience. By the end of 2010, the group had gained more fans than ever before. In april 2011 they recorded their second album "Som en dålig film" which was released in november 2011. By mixing old, classic rhythms with new fresh ideas has LK14 given the trallpunk dimensions never heard of before. The band that once began as a protest has today grown into one of Sweden's most popular punk bands. Discography: 2004 – På andra sidan horisonten (5 song ep) 2010 – I brist på annat (11 song album) 2011 – Som en dålig film (11 song album) Members: Stryparn – vocals, bass Dr Dille – drums, back voc Saffran – guitar, accordion, violin, vocals Stukarn – guitar, vocals Read more on Last.fm. User-contributed text is available under the Creative Commons By-SA License; additional terms may apply.