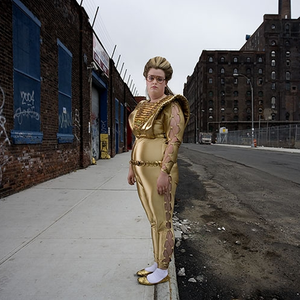 Leslie Meritt Hall (born November 15, 1981 in Ames, Iowa) is a rap artist and front-woman for the band Leslie and the Ly's and the operator of what is best described as a "gem sweater museum". Hall first began displaying herself in "strangely glamorous in unflattering ways" while attending Ames High School in Iowa. During her senior year, she entered the homecoming parade, as part of a prom queen campaign, donning a sparkling pink Goodwill gown, a neck brace, and a tiara (won by her mother who was crowned Miss Aurburn, Nebraska in 1970). Her publicity stunt made the front page of the local newspaper the following day. Her campaign was a success, and when springtime came, she was crowned queen. After graduating from high school, Hall moved to Boston, Massachusetts and completed her education at the School of the Museum of Fine Arts. She has since moved back to her beloved homeland of Ames, Iowa. Leslie began collecting gem sweaters in 2000 and has since amassed a over 165 different sweaters according to her February 2006 interview with Bust magazine. Hall modeled these sweaters on the website gemsweater.com, garnering signficant internet traffic such that she was asked to appear on one of the final episodes of Unscrewed with Martin Sargent. In her 2004 TechTV interview, she stated that "about 65% of the comments" from the gemsweater.com message boards were related to a particular outfit of hers that included gold pants. She decided to form a band with former classmates, Leslie and the Ly's, capitalizing on the popularity of her gem-laden sweaters and gold pants. In 2004 her band released their first album, "Gold Pants." It was not nominated for any Grammys. In 2006, Hall released a solo album titled "Door Man's Daughter." Hall has an older brother who goes by the pseudonym "Arecee" who also performs hip hop music, and who mixed "Door Man's Daughter." Read more on Last.fm. User-contributed text is available under the Creative Commons By-SA License; additional terms may apply.