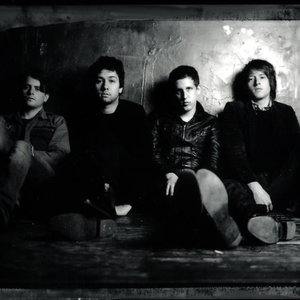 One. LEVY is a four-piece band from New York City who have been together for almost three years. James Levy was a regular performer at the Sidewalk Cafe in the East Village where he met bassist James Broughel and guitarist Matthew Daniel Siskin, drummer David Daniels joined later. They've cut their teeth playing high profile support slots for bands like Razorlight, Guillemots, Adam Green, The Maccabees and The Zutons. In 2005, LEVY charted #37 on KCRW and made the top 20 on over 200 american college radio stations and judging by their debut album (released by One Little Indian) - it's not hard to see why. LEVY has also garnered much love across the Atlantic, having been playlisted on XFM as well as numerous BBC radio shows. They've done in studio live sessions on BBC 6 Music with Gideon Coe, and last fall James of LEVY had a sit down interview with John Kennedy live on XFM London, where he played acoustic for over an hour. In April of 2006, the band joined friends The Maccabees for a 14 city UK tour ending at London's Barfly, where LEVY headlined to a packed enthusiastic and often, singing along audience. On their return back to the states, LEVY played alongside The Guillemots at their feature Bowery Ballroom show. Rotten Love (the album, not the song) is unashamedly simple and pure - receiving national as well as international acclaim from Mojo, Q Magazine, Uncut & Paste. James Levy has spoken about his desire to write songs that 13-year-olds want to be able to play, and none of the ten songs here outstay their welcome by a single note. Lyrically, it's an album about the heart, but with a title like Rotten Love, you can guess that it's not all flowers and puppy dogs. Sure, there's hope there - in songs like Rector Street and the wanton MILFery of On The Dancefloor - but Levy isn't afraid to explore the underbelly a bit more. The title song forensically bisects the moments when a relationship turns sour, and the three-way breakup song Matthew features the line "I'm sorry that I caused you so much pain," eight times in a row. But crucially, all the heartache is wrapped up in a jaunty tune that even the most hapless of milkmen could whistle. In late June of 2006 the band checked into Soho's Magic Shop recording studio, where they put down over 20 new songs in two 16 hour days. "These are the songs that give me goosebumps" says guitarist, Matthew Daniel Siskin, who said the two days in the studio just about killed him. "These are the best we've ever done, and i think we can all agree on that." The band is currently mixing through the summer, but some tracks have already leaked onto the net. Rachael Darmanin, editor of New York City Magazine Underrated came across the new songs last week and posted about them on her Blog, featuring LEVY as her "band of the week", she writes: "The new tracks, while still in the beginning stages of production, harbor on exactly why we loved Levy in the first place. Each track is a self-contained hit, so much so that I wonder if those boys have some sort of machine in their recording studio that knows exactly what chord progressions and melodies I like. And yet when compared to their first album, it's like Neil Armstrong said -- a small step, but a giant leap. If I could characterize the new material, I'd call it a little bit more on the moody side. "Dont Cry" gives all those emo boy bands a run for their money. This is what we call emotions, my friends. James perfects sorrow in a way I haven't heard in a long time. "Glorious," my favorite of the new tracks, is so British I want to give it a cup of tea and yell "God Save The Queen" in the background. And as I kept listening, I just wanted to listen again. "So Hard," one I'm pretty sure I've heard live is instantly memorable -- almost a great answer to their previous favorite "Rotten Love." 2007 sees the release of their new album "Glorious" - containing the tracks GLORIOUS, SO HARD, MINT, LADY NICOLE, HOLY WATER, SQUEEZE, KING JAMES, LOVE AND PAIN, YOUR DEMISE, BENEATH EM ALL http://www.myspace.com/levy Two. Levy was a four piece band from amsterdam in the early 2000's. Read more on Last.fm. User-contributed text is available under the Creative Commons By-SA License; additional terms may apply.