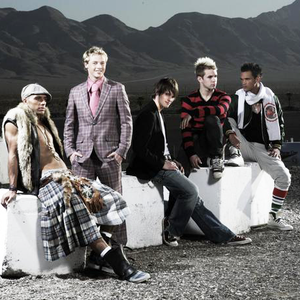 Lexington Bridge, that is five individual characters, everyone with his own personality, combined to one grand union. They represent Street-Urban-Pop and combine Hip-Hop, R&B as well as Dance elements to one unique, sexy, sweeping sound. Without a doubt LEXINGTON BRIGDE is the hottest and most exciting newcomer band… Nye (22), Rob (20), Dax (21), Jerome (22) und Ephraim (18) have one goal for 2007: Impress the European audience with their sound and energetic live-performance. The members of LEXINGTON BRIDGE are from England, the USA and the Netherlands and are able to create one exceptional style with their ease that will draw the attention of the world’s media. Currently the are working on their soon to be released debut album (first single: „Kick Back“ RD: 02.03.2007) with the top of the line songwriter and producers like Tim Hawes (Sugababes, Atomic Kitten), Anthony President (Pink, Janet Jackson, Jamie Foxx), Qura Rankin (Christina Aguilera, Usher, Jennifer Lopez, Rihanna) and Marek Pompetzki & Paul NZA (Shaggy, Sido). Whoever gets the chance to see the guys perform realizes that it doesn’t need words to explain LXB: These five young men with their incredible charisma and charm will capture everybody right away. Lexington Bridge - the bands name was created when the boys spent a lot of time at the recording studio in New York, being on Lexington Avenue. They were sitting together at their favourite restaurant talking about the style of the band: „We build a bridge between countries, cultures, styles and musical elements like Pop, HipHop, R&B and Dance – suddenly we had the idea for a name and LXB was born“ says Nye. The variety of the band also had an impact on the recording. The tracks of the debut album, which is to be released this upcoming spring were recorded in New York, Stockholm, Berlin und Los Angeles. Under the Californian sun they recorded their first single „Kick Back“(RD: 02.03.07). The chemistry between LXB and the US-Producer Qura Rankin (Christina Aguilera, Usher, Rihanna, Chris Brown) was right from the beginning and they went straight to the studio for a creative session.“ The result is an impressive taste of the debut album – and everything Lexington Bridge will present in the months to come: „The future is ours, with our sound and show we will create a bridge: to our fans and audience.“ To see more about the guys check it out: http://www.lexingtonbridge.de http://www.myspace.com/lexingtonbrigde http://www.lexington-bridge-weebly.com Read more on Last.fm. User-contributed text is available under the Creative Commons By-SA License; additional terms may apply.