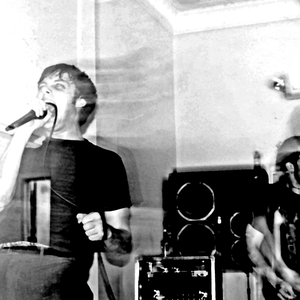 LickGoldenSky enjoys being jerks. From delivering feedback to the crowd while munching potato chips onstage, to talk of the imminent acoustic record. LickGoldenSky isn't afraid of doing whatever they want. But LickGoldenSky doesn't really know what the ground under their feet feels like. They've simply never been there. So while this is just a little more tops-turvy that most hardcore records out there, make no mistake about it: this is still hardcore. One of the great things about LickGoldenSky is that they sound more like eight people than a measly three, and their music goes a little something like this: over in the corner, convulsive guitar butchery humps the leg of the melody, vocals bounce between angry hardcore to lounge star, five minute songs stitch themselves together with two minute songs, and spooky segues haunt the room like tortured specters. So the singer might sound like Fred Durst in one song. And the line "like a nematode after the August rain" is just stupid. But who cares? LickGoldenSky has more feeling that you can shake a stick at. LickGoldenSky may claim not to care to much about what we think, but they obviously care a whole hell of a lot when it comes to making their beautiful music. Read more on Last.fm. User-contributed text is available under the Creative Commons By-SA License; additional terms may apply.