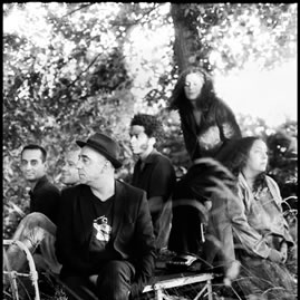 Lo'Jo are a group of France-based musicians, performing and recording a blend of world music with strong North African as well as French folk elements. The band was founded in 1982 in Angers, France by singer/keyboardist Denis Péan and Richard Bourreau (violin/kora). These two have remained central to Lo'Jo throughout their history. For several years, with a rotating cast of members, they played events locally, working with acrobats, street theatre, mime, dancers and film as part of their overall presentation. They have subsequently maintained a communal lifestyle, based in Angers. By the end of the 1980s, they were playing throughout Europe and had appeared in New York as part of an artists' collective. Including Nicholas 'Kham Meslien (bass) and Matthieu Rousseau (drums) (later replaced by Franck Vaillant), they consolidated their line-up, and their first album, Fils de Zamal, was released in 1993. In 1995 the group added Berber singer/saxophonist Yamina Nid El Mourid and her sister, Nadia Nid El Mourid, who brought a strong North African influence to the music. In 1996, the new lineup recorded Sin Acabar, and 1997 saw them complete Mojo Radio, both with English producer Justin Adams. Upon the latter's release they found more acclaim in the world music community, getting them on the WOMAD circuit. In 1999, they journeyed to Bamako, Mali, to begin work on Bohème de Cristal. While in Mali, they became involved in the organization of the Desert Music Festival held in January 2001. They have also collaborated with a wide variety of musicians, including Tinariwen. In 2002 they released the acclaimed Au Cabaret Sauvage (originally issued in France as L'une des Siens). This was followed by a live album Ce Soir Là (2003), and a new studio album Bazar Savant (2006). In 2009 they released the album Cosmophono, and toured in the UK. Discography Studio: 1990 The International Courabou 1993 Fils de Zamal 1994 G7 of Destruction & Artisans of Peace 1996 Sin Acabar 1998 Mojo Radio 2000 Bohême de cristal 2002 L'une des siens 2006 Bazar savant 2009 Cosmophono 2012 Cinéma el Mundo Other: 1989 Depuis très longtemps (K7) 1995 Le disque dort (33 tours) 2003 Ce soir là... (Live) 2007 Tu connais LO'JO ? (Best of) Website (Bandinfo): http://www.lojo.org/ Facebooksite: http://www.facebook.com/lojomusic MusicBrainz:http://musicbrainz.org/artist/a1c1fb23-38e0-4d7f-8fed-3c81fef5ad0f Read more on Last.fm. User-contributed text is available under the Creative Commons By-SA License; additional terms may apply.